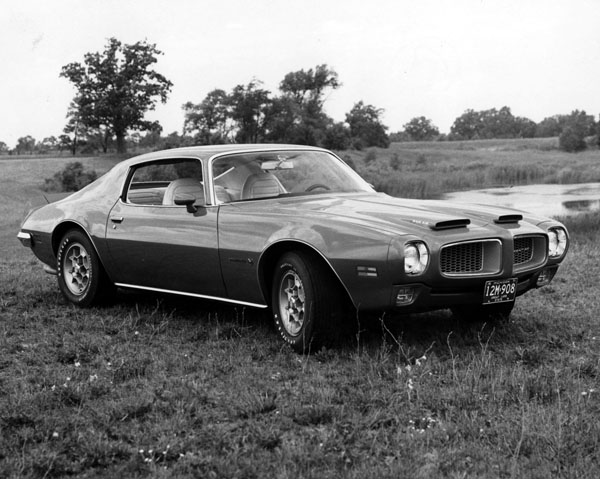 1972 Pontiac Firebird Formula
In 1967 General Motors, caught napping, finally produced its answer to the Ford Mustang.
It was the F-body Camaro/Firebird. Although the Pontiac division wanted a car which aped
the Chevrolet Corvette they were forced to accept a Comaro clone with a few cosmetic
changes designed to give the car a somewhat distinctive appearance. It must have upset
a number of Pontiac executives who felt that they, as creators of the Tempest and GTO,
ought not to be following but leading in the performance car stakes.

To further rub salt into the wound the prototype two-seater based around the Corvette,
which the Pontiac Division had secretly developed, appeared on the market at a later date
with changes to the lighting and grille as the face-lifted Corvette for 1968.

Whilst it was slightly more expensive than either the Mustang or Camaro, the Firebird with
the added option of a 6.55-litre V8 engine sold well. To reach 50,000 units within 10 weeks
of its launch and top 113,000 units in 12 months, although behind the 200,000 plus
Comaro’s sales, indicated good public acceptance.
Even though it was a more expensive car amongst the choice of muscle cars available to
the American buyer Firebird was a fast, reliable and good handling car that got favourable
mentions whenever the subject of magazine road-tests.

In 1968 the addition of a three-speed automatic transmission in place of the standard GM
two-speed issue added further to its appeal. In 1969 the first major face-lift to this model
was done. As well as a few centimetres increase in length and track measurements, the
changes included a new engine with aluminium pistons, heavy-duty rockers, aluminium
intake manifold and a new cam system.

As the GM ‘no race edict’ was still in force this car was not destined for the racetrack. But it
still wasn’t the ultimate Firebird which was just around the corner. Pontiac had planned a
completely new model – TransAm.