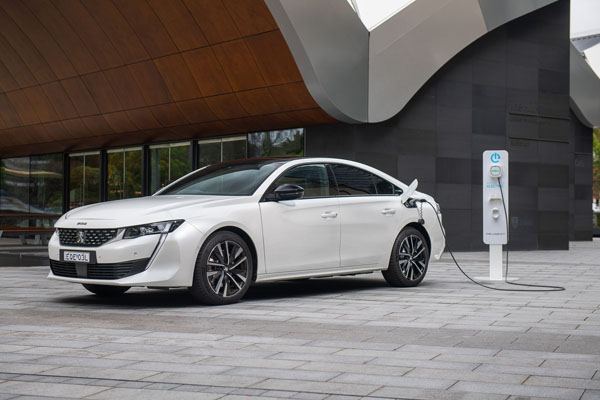 Originally offered as a four-door sedan or five-door station wagon, the Peugeot 508 has
been on sale in Australia since July 2011. It fitted into the space between the smaller 407
and larger 607, effectively replacing both cars.

The second generation 508 was launched in 2019 but didn’t arrive here until August 2021
and featured Peugeot’s first-ever plug-in hybrid (PHEV) powertrain.

While there is a large choice of engines and equipment levels available overseas for the
508, only three models are available here, all with the top-grade GT variant and with the
choice of Fastback or Sportswagon bodies and 1.6-litre turbocharged petrol engines.

The 508 GT PHEV only comes as a Fastback, the engine-only 508 GT is offered in both
body styles.

STYLING
The relatively small chequered radiator grille has chrome edge trim with the iconic Peugeot
Lion symbol in the centre and 508 lettering above it at the front of the bonnet. There are
twin headlights on either side above long curved turn indicators. ‘GT’ badges on the C
pillar complete the car’s ID.

The PHEV has the fuel filler on the right rear panel and the battery charge point on the left.

The rear is even more attractive, with triple tail and brake lights each containing three
vertical bars that rolls across when activated.

INTERIOR
Although the latest 508 is lighter, lower and shorter than its predecessor it actually
provides greater interior space. Not to the extent of similarly sized SUVs but enough for
reasonable occupant comfort.

The 508 comes with the latest version of the Peugeot i-Cockpit which combines the small
sport steering wheel with a large head-up instrument panel and central infotainment touch
screen, blended together and ergonomically positioned.

The seats are quilted Nappa leather throughout with both front seats powered, heated and
with a multi-point massage function.

Boot space in the GT and GT PHEV Fastback is 487 litres with all seatbacks in place,
expanding to 1537 litres with them folded. The Sportwagon increases these capacities to
530 and 1780 litres respectively. Powered tailgate is standard. 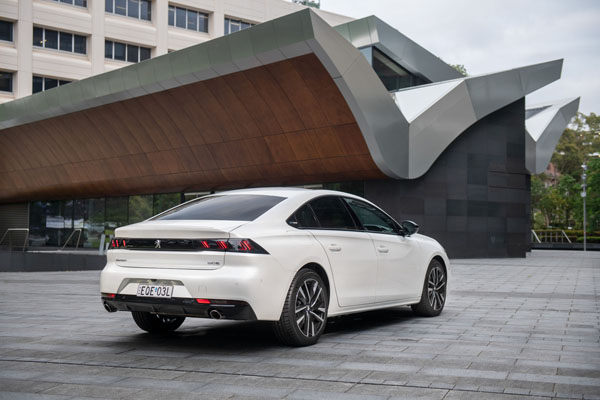 POWERTRAINS
The 508 PHEV combines a 133 kW 1.6-litre turbo-petrol engine with an 11.8 kWh Lithium-
ion battery and 81 kW electric motor mounted on the front axle for a combined power
output of 165 kW.

The two non-hybrid 508 models are powered by a high-output version of Peugeot’s 1.6-
litre, turbo-petrol, four-cylinder engine developing 165 kilowatts of power and 300 Newton
metres of torque.

All variants are mated to an all-new Aisin eight-speed automatic transmission.

INFOTAINMENT
All variants come with a 10-inch high-definition touchscreen in the centre of the dashboard
and a 12.3-inch digital instrument cluster in front of the driver.

Embedded 3D satellite navigation is standard including voice recognition. There’s also
smartphone mirroring for Apple CarPlay and Android Auto, both wired as well as two USB
sockets in the front centre console and two more in the rear console plus 12V sockets,
including one in the boot. 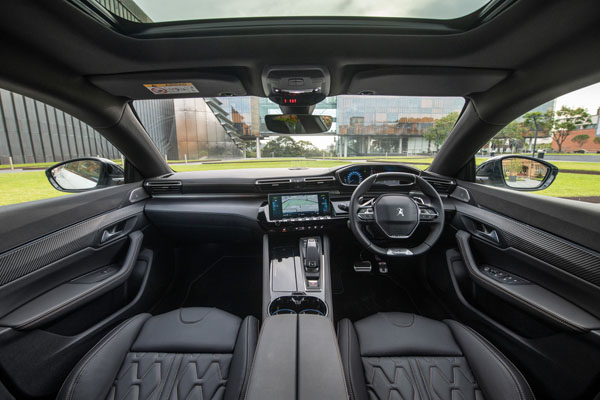 Sound is through a FOCAL 10-speaker premium system with dedicated amplifier and
subwoofer. DAB digital radio is available for those who live in a capital city.

DRIVING
Low-slung styling can make it a bit awkward for taller occupants but it’s a sporty-ish car so
that’s to be expected. Once seated though the seats are comfortable and supportive

Although the small squared-top sports steering wheel isn’t to everyone’s taste we loved it
not only for its feel but also because it provides an unobstructed view of the digital
instrument panel.

One of our least-favourite features in most new releases is lane correction which
automatically adjusts the vehicle’s steering, often quite vigorously, to keep it in the centre
of the lane. While we normally turn the feature off before we start our test, we found the
correction in the 508 quite subtle and were more than happy to let it do its job.

We love driving electric cars with their sharp, smooth and silent acceleration and the 508
PHEV provides plenty of that when it’s in EV mode.

Out on the open road the 508 is in its element with the ride and handling that has always
made Peugeots so popular with keen drivers. The GT tag is used far too often in current
cars and in most cases is meaningless. No so in the 508 GT because it is far closer to
being a Grand Tourer capable of cruising long distances through interesting drive routes.

With our JetCharge Wallbox we were able to fully charge the small battery in the PHEV in
just over three hours. Peugeot lists a battery-only range of 55 kilometres. The best we
could manage, in fairly moderate driving conditions, was 40 km.

Like all the other plug-in hybrids on the market that offer pure EV driving, Peugeot lists a
totally unrealistic fuel consumption figure of 1.8 litres per 100 kilometres. With the battery
fully-charged we covered 100 km using 3.4 L/100km. Although that’s nearly double the
listed figure it’s still very good. However, with the battery flat, and running in normal hybrid
mode including battery regeneration, we averaged a less-impressive 6.4 L/100km.

SUMMING UP
If you’ve had enough of the functionality and sensibleness of your SUV and crave a bit of
driving enjoyment then the Peugeot 508 could be just what you’re looking for.

It’s a superbly-crafted and stylish car that drew admiring looks wherever we went.

However, unless you can conveniently maintain a charge in the battery and limit the
distances travelled, then we feel the extra $17,000 that you need to pay for the PHEV over
the petrol-only equivalent GT just can’t be justified.

All Peugeot passenger vehicles come with a five-year, unlimited kilometre warranty
extended to eight years, but limited to 160,000 km, on the battery.

Stop Press: As of the 1st of July 2022, Peugeot increased the prices on its passenger
vehicles by 6.0 percent. This equates to between $3591 and $4620 on the 508. We
suggest you get in quick and do some serious haggling at your local dealership.