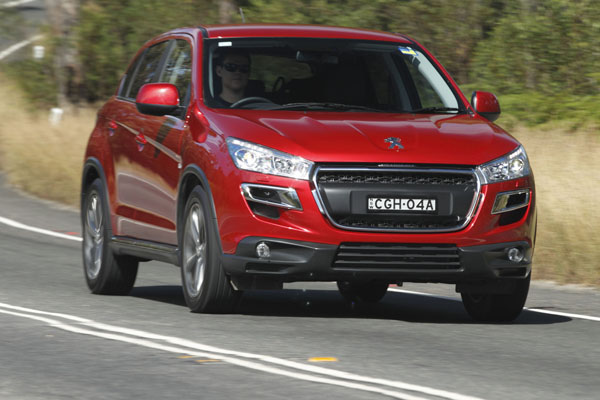 The Peugeot 4008 was the French carmaker’s first entry into the booming SUV market when it was launched here in June 2012 . As a toe-in-the-water exercise the 4008 is a joint venture between Peugeot and Mitsubishi. It comes off the same Japanese factory as the Mitsubishi ASX.

Japanese quality and French styling flair – hmm, that’s a nice combination. Though it hasn’t exactly set the sales charts on fire the 4008 has done moderately well.

Although the two vehicles are pretty much the same under the skin, Peugeot 4008 and Mitsubishi ASX have quite a different appearance. The roofs and doors are shared, all other panels are different.

Interior space in the Peugeot compact SUV is about par for the course in its class. There is reasonable rear headroom despite the dipping roofline. The back seats are really only suitable for two adults or three pre-teen children with borderline rear legroom when the front seat is well back.

Boot capacity is a useful 416 litres, this expands to 1193 litres with the rear seatbacks folded. Versatility is good as there’s a centre ski hatch. The 4008 has a relatively high loading height.

The 4008 is only offered in Australia with a 2.0-litre petrol engine (110 kW / 197 Nm) which comes as a surprise as Peugeot has been strong in diesels in this country for many years. Though it’s perhaps not such a surprise when you learn the diesel comes only with a manual gearbox.

The petrol engine has sufficient performance for most uses, but can struggle at times with a load on board and climbing hills. If that describes your normal driving you may care to bring the family along on your pre-purchase road test.

Peugeot 4008 Active comes with 2WD or AWD and a choice between a five-speed manual or CVT auto. The 4008 Allure is AWD and CVT only. (Incidentally, the Mitsubishi ASX is sold in diesel and petrol format.)

The Peugeot 4008 AWD models have three transmission settings: 2WD for urban conditions and lower fuel consumption, 4WD with electronically controlled torque distribution between the front and rear axles, and 4WD Lock for conditions that require maximum grip. Not that we have ever seen a Peugeot off-road…

The suspension compromise tends more towards the firm than the soft which will attract the driving enthusiast but it’s not so harsh as to deter the average commuter if they are on some rough and ready roads at times. See our previous notes about your private test drive.

Peugeot hasn’t had a lot of success in Australia over the past decade. The recent change of importers to Inchcape (best known from bringing in Subarus), may change that situation. In the meantime check that there are Peugeot dealers in your neighbourhood, if not you may be making long trips for service, repairs and spares.

On the subject of spares we haven’t heard any major complaints about either price or availability.

Insurance premiums tend to vary a fair bit from company to company, which isn’t unusual on a vehicle that’s not sold in large numbers. As always, shop around and be sure you’re comparing apples with apples.

WHAT TO LOOK FOR
Built to a high standard by Mitsubishi the Peugeot 4008 is generally trouble free. However have a professional look it over after you’ve done an inspection to the best of your ability.

A manual gearbox should be free and easy during changes. If it’s hard to shift and is noisy during changes be wary as the 4008 could have led a hard life with a bad driver.

Look over the interior for signs of hard wear, particularly in the back seat where little darlings my have given it a hard time.

Check for damage on the sides and floor of the luggage area.

It’s unlikely a 4008 will have been off-road. Look for scratches on the paint of the bumper corners and on the doors and sills.

Underfloor damage is a good reason to reject the car, unless you’re in the automotive trade and can get the Pug at a very low price.

CAR BUYING TIP
Spend just as much pre-purchase energy shopping for finance and insurance as you do for the vehicle.