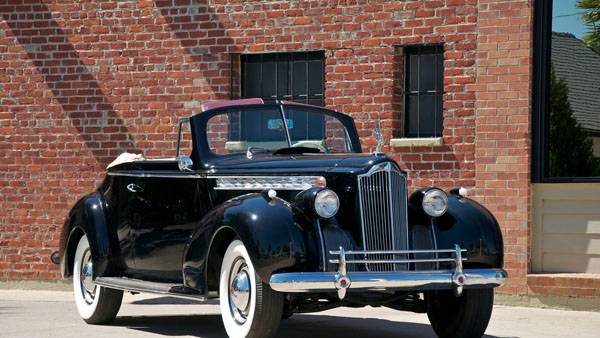 By 1939, the Americans had finally caught up with the European car design approach
where unitary construction had become an acceptable form of construction and diversity in
coachwork soon began to appear. Packard’s 120 Convertible was one such example.

They started off by using a conservative approach to styling, including the side mounted
spare wheel, and so the car’s overall appearance was more appealing than that of its
competitors such as Buick and Cadillac. By using the same body parts for both their
Super-Eight with a nine-bearing motor and the 120 Convertible with its less expensive five-
bearing one they were able to save on costs.

The 120 was an important car in Packard’s history. This model was the first Packard to
compete in the highly competitive mid-priced eight-cylinder car market. However, many
Packard enthusiasts see the production of the 120 as the start of Packard losing its grip on
the market as the premium American luxury automotive brand. Packard introduced the 120
as a way of retaining their business during the final years of the Great Depression.

Whilst other manufacturers may have introduced a cheaper car under a different brand
name Packard only had a single production line in their manufacturing facility, and this,
together with the expense of establishing a new brand, may have influenced their thinking.
By making the 120 as a Packard, the car could be brought to market speedily, and gave
buyers the thrill of owning a Packard.

This car was the first in the Packard line to use an independent front suspension. As one
might have expected from a prestigious company, the design had a special characteristic
unique to Packard. The suspension was an unequal upper and lower A-arm type with the
largest possible lower A-arm composed of two different arms bolted together at a 90-
degree angle.

The support arm was a heavy steel forging reaching a few degrees forward of lateral from
the front wheel support to as close to the centreline of the car as is practicable. The upper
A-arm was conventionally welded and oriented parallel to the lower side. Between it and
the frame was an old-fashioned horizontal shock absorber whose two cylinders were side
by side. With this system the support arm carried all the load; the torque arm carried the
accelerating and decelerating torque, whilst the upper arm controlled the camber.

In 1939 the 120 was offered not only as the Convertible Coupe but also as a Touring
Limousine. New for the year was the introduction of column shifting, which did away with
the floor shifter. In both body forms a total of 17,647 units were built between 1939 and
1941.