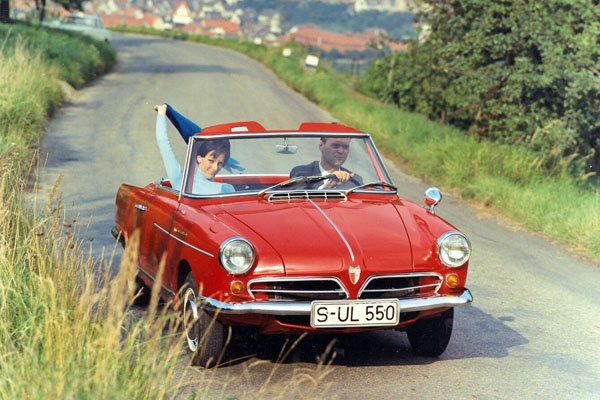 The NSU Wankel Spider was the first car to be powered by the Wankel rotary engine. A rotary engine uses an internal shaft with lobes that form combustion chambers and in that layout combines the principles of the turbine and the piston.

This engine was invented by Dr Felix Wankel. He intended it to be an answer to the perceived inefficiencies of the piston engine. Dr Wankel felt that the direct rotary action as a driving force for cars was one step up from imparted rotary action, as is the case with the conventional pistons-pumping-driveshaft-turning setup. The eccentric rotor spins inside an eccentric combustion chamber, and imparts its torque to an eccentric driveshaft.

Mazda has since produced cars equipped with rotary engines with varying measures of success, the most notable being the RX-7. Australian Ralph Sarich has also developed a two-stroke rotary engine. Imbalance problems, combustion sealing and poor reliability are just some of myriad problems which commercial versions of these engines suffer and, whilst their design principles appear sound, the designs don’t as yet translate well to production models.

The first Wankel engines were single rotor designs, and had an unbalanced feel. The as-yet crude engine suffered from a whole host of problems, including failure of the chamber seal at the tip of the rotor. However NSU, a West German company, showed an interest in the engine and the apparent advantages it offered when used as a power plant for an automobile. They worked with Dr Wankel to develop a car which would use a Wankel engine as its power source. The result was the NSU Wankel Spider of 1964. It was a very smart little two-seater with a top speed of around 145km/h.

Whilst it had good looks this was not enough to compensate for its other deficiencies. With a tiny rotary powerplant of 1.0-litre capacity, it used petrol at about the same rate as engines three times its size. On top of this it was extremely unreliable; most of all, the Wankel engine failed due to oil leakage and rotor-tip seal failure. The engine virtually self destructed after only 11,000km, and NSU’s expenditure on special new machinery designed to produce these engines was a total write-off.

In spite of this NSU was not easily defeated. They later developed the Ro80 car powered by a twin-rotor Wankel engine, but it too proved to be totally unreliable. The moves into unproven engines took their toll and NSU eventually had to merge with Volkswagen to stay viable.