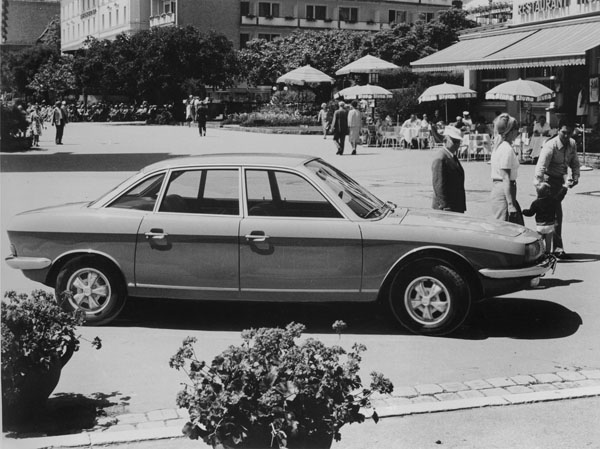 In many ways the Ro80 was to the sixties what the Citroen Goddess was to the fifties. The
Ro80 was recognised as a futuristic design when it greeted the public light of day at the
end of 1967. The NSU was regarded as revolutionary more for its use of the Wankel twin
rotor engine than for any other single attribute. Soon, argued the critics, maybe all cars will
have rotary engines. There are just these few little teething troubles to fix …

NSU had been proud of its decision to purchase the rights to Felix Wankel’s radical engine
and the Ro80 was the first production sedan ever to use it. It is fair to assert that the
reliability of the rotary engine – mainly the seals – was not entirely secured until the early
1970s.

It was an open secret that the Ro80 was the car either to save or sink the listing NSU
company. NSU sank in deep water, but not without trace. Numerous engineers
immediately went to work for Volkswagen-Audi, which took over NSU in August 1969.
Despite the takeover – the new branch of Volkswagen was known as Audi NSU – NSU was
able to persevere with the Ro80 until 1977, when the car was dropped and the NSU name
retired into the history books. A total of 37,204 were produced in the course of that
decade.

The NSU Ro80 was mercilessly tested for two years – the engine, the chassis, the
bodywork and the mechanical equipment. Testing there may have been, but the Ro80 was
rushed to market before the engineers were entirely satisfied. They knew there were
potential problems with the engine, but management decreed that this, the car to save the
company, just had to be put on sale, ready or not.

The Wankel engine proved to be the fatal flaw in a charismatic design. The seals couldn’t
handle the pace. To its credit, NSU replaced thousands of Ro80 engines free of charge,
even those that had somehow run to the end of the extended warranty period. Almost as
innovative but far more successful in practice was the three-speed torque convertor semi-
automatic gearbox fitted to the car. There was no clutch pedal and the clutch itself was
actuated by a micro-switch in the gearknob – touch to declutch!

The Ro80 reached 161 km/h at 5500 rpm. This was also the point of maximum power (86
kW). The Wankel could spin to 8000 and as well the car had an extraordinary, almost
eerie, mechanical quietness. Initial acceleration could best be termed relaxed, even tardy.
But the Ro80 displayed that typical big German car freeway performance. It was perhaps
the world’s first production sedan truly to demonstrate the advantages of an aero-
dynamically efficient design.

When you compare the big NSU with its rivals in the luxury 2.0-litre class, it becomes even
easier to see why it was voted Car of the Year. Where the NSU scored mightily was in its
combination of elegant, aerodynamically efficient styling with excellent dynamics and first-
class accommodation.

The Ro80’s interior was rather more luxurious and better equipped than those of its rivals.
There was a choice of high-grade cloth or vinyl. The instrumentation was both stylish and
legible. Sadly, only the engine – the very aspect intended to set this machine apart – held
the Ro80 back. The error was essentially one of timing. Had NSU somehow been able to
delay production and buy the time to sort out Felix Wankel’s brilliant engine, things might
have been different.