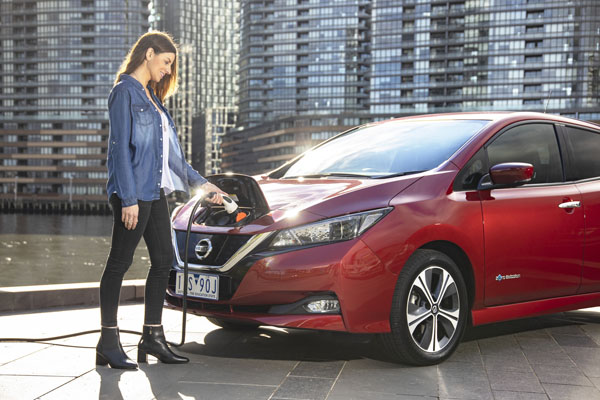 Who would have thought during the global fuel crisis of the 1970s that less than fifty years later motorists would be laughing in the face of the avaricious petrol barons at the demise of the internal combustion engine?

The time has not come yet but if the development of electric vehicles such as the Nissan Leaf continues, that day is just around the corner. Light at the end of the tunnel.

The Leaf first saw the light of day in 2010, arriving in Australia two years later. Since then more than 410,000 have been sold in 51 markets, making it one of the most popular electric vehicles in the world.

In those days a 24kWh lithium-ion battery gave the Leaf a range of 170 kilometres. The new second generation Nissan Leaf, with its 40 kWh 350V battery, is capable of travelling 270 km with no nasty tailpipe emissions.

Plugging into a 15A 240V home wall socket the Leaf will recharge from ‘battery low’ warning to full charge in around 24 hours. Alternatively, depending on the fast charger used, it takes about 7.5 hours from empty or with the more powerful box to 80 per cent full from low warning in just 60 minutes.

But more than that, the Leaf has the capability of returning power from its battery to the grid for home or business use. This means the car can be charged during off-peak periods, say overnight, and plugged in to the home to power the kettle, cooker or even hairdryer in the morning high-rate period.

Alternatively, the Leaf can be charged ‘on the run’ at any of 783 public stations around Australia, of which 69 are of the quick variety, doing the job in 60 minutes. Queensland government, for example, has installed a string of 18 DC chargers between Coolangatta and Cairns. 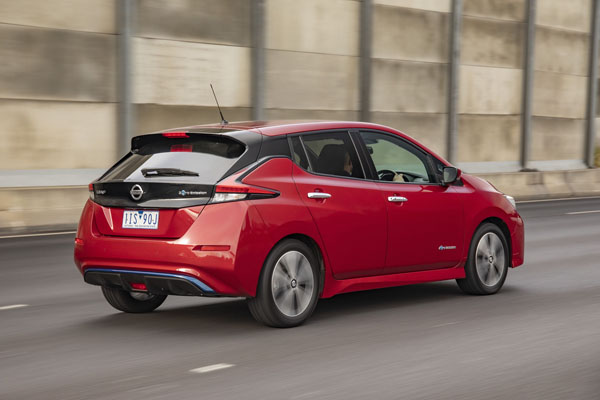 Battery power is sent to the powertrain delivering 110 kW and 320 Nm, 38 per cent and 14 per cent more, respectively, than the previous Leaf. The motor is up to a third quieter than ICE / hybrid rivals.

A feature of the set-up is the operation of the e-Pedal, which at the flick of a switch on the centre console, allows the vehicle to be driven using the accelerator alone.

By simply taking the foot off the accelerator, the car comes to a smooth, gradual halt and is held without the use of the brake pedal. Thus, the need constantly to shift the foot between pedals (that is if you’re not a left-foot braker), especially in heavy traffic, is reduced and driving becomes more relaxed.

In aggressive braking situations, which Nissan puts at about 10 per cent of the time, the driver can return to using both feet. Both situations were given a solid workout during a launch drive in the Melbourne CBD and suburbs. With little practice, both situations were easy to use and stress free.

Unruffled is the perfect description of the Leaf’s performance. To match the improved output of the electric motor and converter, engineers enhanced the car’s chassis to improve stability. Also, the heavy battery is situated at the centre of the body to achieve better balance than with a front-engine vehicle.

Electric power steering has a more linear feel and is more responsive to sharp changes in direction. Noise, vibration and harshness have been moderated with aerodynamic upgrades and structural rigidity, while the electric motor has been made quieter.

On the outside, new Leaf maintains the look of a conventional hatchback, EV badging being the only giveaway. Nissan’s aim was clean and simple lines and a sleek silhouette wrapping around hi-tech workings.

Branding is taken care of by the company’s signature V-motion radiator grille, ‘boomerang light set-up and floating roof in keeping with similar models such as the popular X-Trail compact SUV. 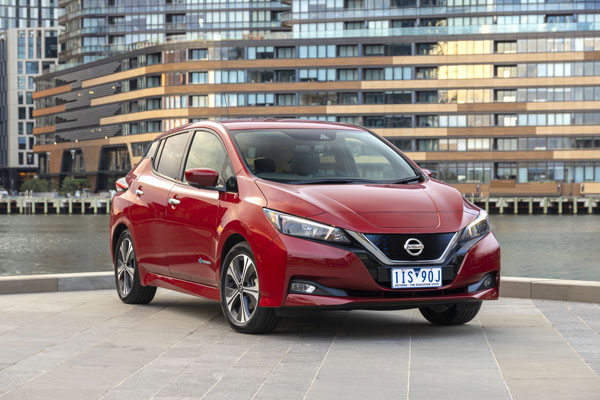 Dusk sensing LEDs with dual, direct-lens low and high beams, enhancing illumination ahead, are a first for Nissan. Aerodynamic body features and wheels gives the Leaf a drag co-efficient of 0.28.

Nissan engineers also went to work on the battery charging point at the front of the vehicle, altering the angle of the socket allowing owners of all heights to connect the cable without bending down.

Inside the cabin the word was premium ambience with room to relax. The combination of analog speedo and multi-information display uses a 7-inch advanced Drive Assist display on the left incorporating a power meter as the standard setting, which can easily be changed by the driver.

The centre display screen allows the driver to operate audio and navigation systems and connect to smartphones with ease. An 8-inch colour touchscreen allows Apple CarPlay and Android Auto to be operated.

A sporty flat-bottom, leather wrapped heated steering wheel incorporates multi-functions, including Advanced Drive-Assist, which can be used by the driver without taking hands off the wheel.

The centre console with cup holders between driver and front passenger seats includes a new storage area at its base ideal for phone or wallet, as well as easily reached power switch, 12V outlet and USB port.

The rear cargo area of 405 litres has been redesigned to offer better use of space, while the lithium-ion battery now has greater capacity, its dimensions have not changed from the previous model, leaving room for five occupants in comfort.

Because EVs are quieter than most cars, the new Leaf also incorporates a unique system that tells pedestrians when the car is being driven at low speeds. Below 30 km/h and in reverse, the Leaf lets out a sound towards the pedestrian or cyclist up to five decibels lower than the conventional petrol or diesel engine. It stops when the car does.

Built in Sunderland, north-east England, priced at $49,990, plus on-road costs, the new Leaf can be bought through any of 89 dedicated Nissan dealers around Australia.

It is covered by a five-year vehicle warranty and an eight-year battery warranty.

Nick Thomas, the Nissan global director of electric vehicles, said as the cost of the traditional internal combustion engine goes up, that of the battery comes down, making EVs an attractive proposition. “There is a price crossover point coming,” he said.

Nissan Australia managing director, Stephen Lester, put the Leaf, with its three pillars of intelligent drive; intelligent power and intelligent integration, in the vanguard of ‘intelligent mobility’, which is the company’s electric vehicle future.

MODEL LINE-UP
Nissan Leaf EV $49,990
Note: This price does not include dealer or government charges. Contact your local Nissan dealer for drive-away price.