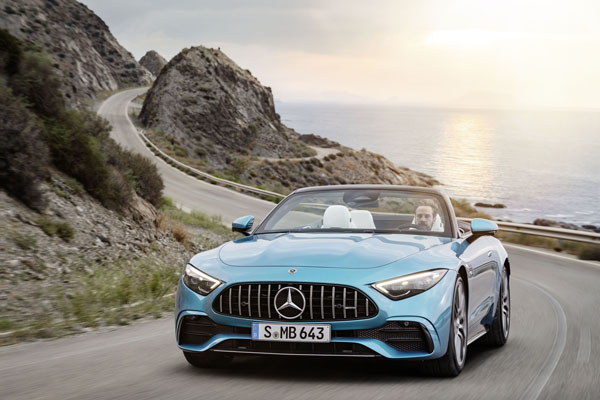 Mercedes-AMG has provided details of the SL 43 an entry-level model of the roadster. it’s
powered by an in-line four-cylinder 2.0-litre petrol engine. For the first time in the world, it
has an electric exhaust gas turbocharger used in a production vehicle.

This technology comes from Formula 1 and we are told it guarantees spontaneous throttle
response across the entire rev range. The turbocharger is operated via the 48-volt
electrical system, which also feeds the belt-driven starter-generator.

Mercedes-AMG SL 43 has an output of 280 kW and a maximum torque of 480 Nm, plus
an additional short-term boost of 10 kW from the RSG in certain driving situations.

The turbocharger is operated via the 48-volt on-board electrical system. It works at speeds
of up to 170,000 rpm, which enables a very high airflow rate. The turbocharger, electric
motor and power electronics are connected to the combustion engine’s cooling circuit to
create an optimal temperature environment at all times.

It produces 280 kW at 6750 rpm. Maximum torque of 480 Nm is available between 3250
rpm and 5000 rpm. Depending on the situation, the system also guarantees an additional
boost of 10 kW for a short time from the belt-driven starter generator. 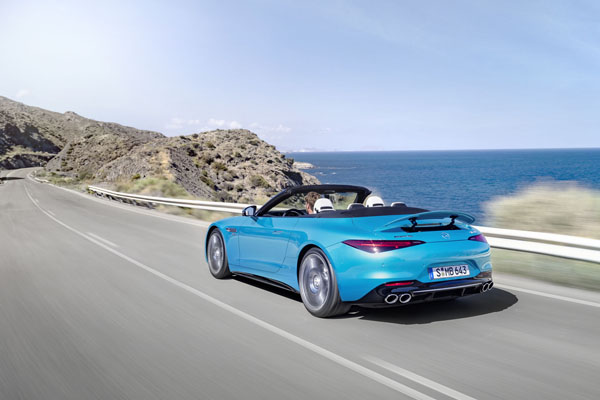 It has 2+2 seating and the rear seats has space for people up to 1.5 metres tall (up to
1.35 metres with a child seat). If rear seats are not in use an insertable draft stop behind
the rear seats can protect front-seat occupants from draughts on the back of their necks.

The body shell architecture is to realise the typical AMG Driving Performance with a focus
on lateral and longitudinal dynamics, while at the same time meeting the high standards
on comfort and safety.

In the new SL, the intelligent material mix enables the highest possible rigidity at a low
weight. The materials used include aluminium, magnesium, fibre composites and steel.
The steel windscreen frame serves as roll-over protection in conjunction with the roll bar
system behind the rear seats, which pops up at lightning speed when needed.

Opening and closing the soft top takes only about 15 seconds and is possible up to a
speed of 60 km/h. The soft top is operated using the switch panel in the centre console or
the multimedia touch screen, on which an animation shows how the process is
progressing.

The high-resolution 12.3-inch LCD screen of the instrument cluster is integrated into a
high-tech visor that prevents reflections caused by sunlight. The tilt of the touch screen on
the centre console can be electrically adjusted from 12 degrees to 32 degrees.

Mercedes-Benz SL 43 is equipped with a wide range of electrically and manually
adjustable luxury seats in a combination of ARTICO man-made leather and fabric. 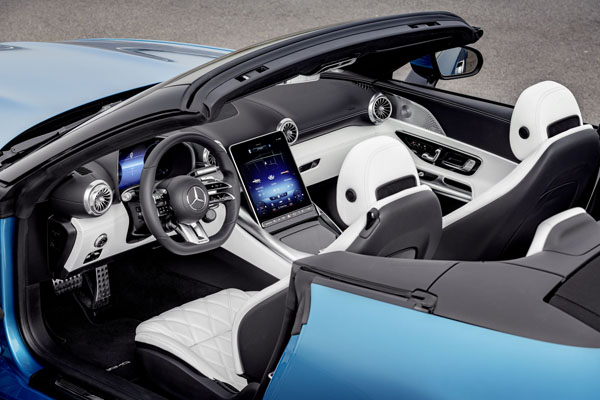 The new SL is the first production vehicle ever from Mercedes-AMG to feature a multi-link
front axle with five links arranged entirely within the rim. This significantly improves the
kinematics. At the rear axle, a 5-link design likewise controls the wheels.

The driver can pre-select the basic set-up via the AMG DYNAMIC SELECT driving modes:
at the touch of a button, the handling characteristics change, for example, from full
dynamics in “Sport+” mode to smooth cruising in the “Comfort” setting.

The Mercedes-AMG SL 43 can be equipped with active rear-axle steering as an option.
Depending on the speed, the rear wheels steer either in the opposite direction (up to 100
km/h) or in the same direction (faster than 100 km/h) as the front wheels. The system thus
enables both agile and stable driving characteristics.

All in all, the new Mercedes-AMG SL 43 is an astonishing example of the latest in
automotive engineering. We look forward to getting behind the wheel of one when they
arrive here towards the end of 2022.