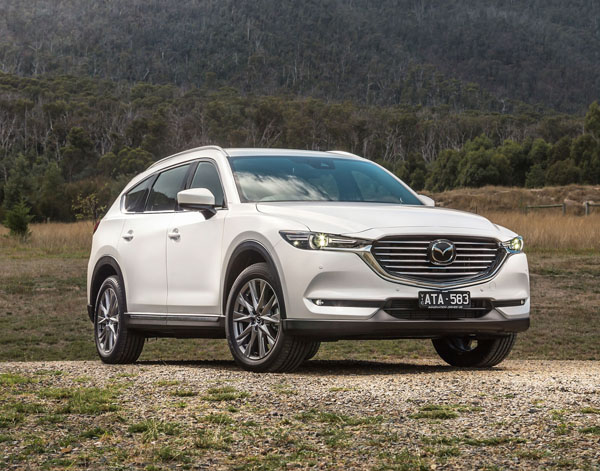 Mazda Australia has plugged a hole in its SUV lineup by introducing the CX-8 Diesel. Potential buyers of the CX-9 seven seater had wanted a diesel engine, but it’s only offered with a petrol unit. Sometimes they settled for a CX-9 petrol – but others went to a different marque that could offer a turbo-diesel, which obviously didn’t please Mazda Australia.

The CX-8 is sort of a combination of the Mazdas CX-5 and CX-9, sharing the wheelbase of the 9 and the width of the 5. It’s shorter than the CX-9 overall and many components are unique to the CX-8.

Interestingly, the CX-8 had only ever been intended for sale on the Japanese market. But Australia is highly regarded by Mazda’s head office, where they eventually relented and made the CX-8 available Downunder. The fact that the Japanese drive on the same side of the road that we do made it a lot easeir. 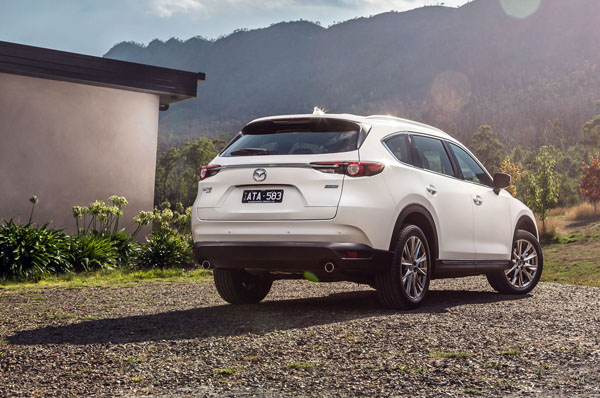 The front seats in the Asaki are power operated, with six-way adjustment for the passenger and ten-way for the driver.

Added safety features on the Asaki are front parking sensors (both models have rear sensors), a 360-degree camera,
This is a good looking vehicle and the slick lines of the new Mazda CX-8 Diesel are almost coupe-like at the rear. However, if all seven seats are in use there’s no space for a large suitcase to be carried upright in the boot.

All CX-8s have a seven-inch infotainment screen that’s clear and easy to us. Apple CarPlay and Android Auto aren’t available at this stage, but is expected to arrive late this year. When this happens it will be necessary for the system to be upgraded by a Mazda dealer. (Note that this will apply to most other recent Mazda models, contact your dealer for details.

Power for both CX-8 models is powered by Mazda’s well know SkyActiv 2.2-litre four-cylinder turbo-diesel. It produces up to 140 kW of power and an impressively high 450 Nm of torque, the latter available from 2000 rpm.

All CX-8 Diesels have a six-speed automatic transmission.

SAFETY
Mazda CX-8 has yet to be tested by ANCAP. While not committing themselves at this stage the Mazda Australian hierarchy appears confident it will receive the maximum five star rating. 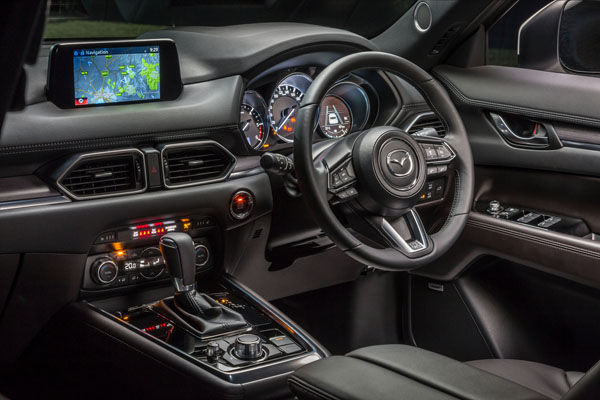 DRIVING
The CX-8 Diesel is relatively narrow inside and is best regarded as a four+three, that is four adults and three children. There’s good legroom and comfortable headroom in all seats.

Mazda set up an excellent 350+ kilometre drive program on Queensland’s Sunshine Coast running on an inland route from Noosa to Hervey Bay. It covered everything from peak hour (well peak hour-ish) traffic, suburban roads, motorways, scenic hilly terrain – and used sealed and dirt roads. Exactly the sort of running a family in their Mazda CX-8 Diesel would take on a weekend adventure trip.

Despite the ‘Sport’ in its name this Mazda is certainly not a sports SUV, rather it has suspension and steering set up in comfort mode. It handles safety and predictably and you would have to be well over sensible speeds to get into trouble. That said, it you do see yourself as a keen driver you may care to look elsewhere.

As is often the way, Australia’s coarse-chip roads create a fair bit of noise. Anywhere else it’s peaceful and relaxing to sit in.

The turbo-diesel engine is nicely quiet at idle and fro the outside is almost to petrol engine standards. Inside the sound levels are nicely muted.

Response from the diesel is reasonably prompt with a minimum of lag. We found the six-speed automatic transmission to be in the correct gear virtually all the time.

SUMMING UP
Mazda CX-5 diesel is an attractive looking seven seat SUV that seems sure to have good sales as it neatly fills gaps in the company’s lineup. You can now get Mazda CX as a 3, 5, 8 and 9 format. Which may leave space for a CX-4? Who knows…