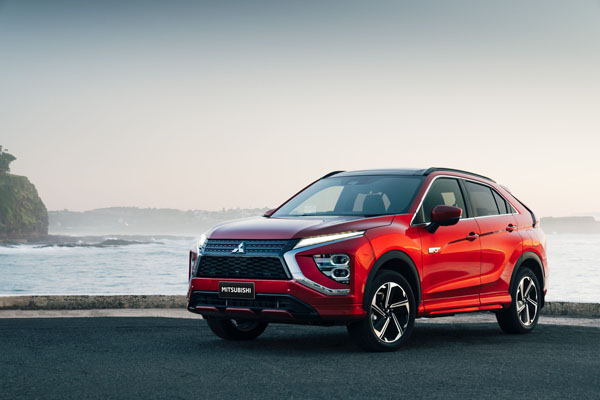 Mitsubishi is a long-time player in electric power in vehicles – to the extent that I was one of an Australian group that Mitsubishi flew to Japan in 2010 to drive the i-MiEV, its first electric vehicle. We didn’t just go to some sort of fancy high-tech facility, but also got to buy things at a shopping centre and have lunch at a cafe. Both of these locations had EV charging facilities.

About a year later we drove the Mitsubishi i-MiEV in Australia when it was launched here. It struggled to get from where we picked it up Brisbane to our home on the Gold Coast, a distance of just under 100km on a single charge. How things have changed in the last 10 years.

While electric vehicle ranges have improved most people are still reluctant to buy full-electric vehicles but are increasingly going for hybrid petrol/electric. These come in two types – those that simply have the petrol engine charge the battery and ones that can be plugged in and charged, known as Plug-In Electric Vehicles or PHEVs.

Now Mitsubishi has introduced the Eclipse Cross PHEV which joins its larger brother the Outlander that has been on sale here since 2014.

It’s expensive. Very expensive. You have to pay $12,500 more for the PHEV compared to the similarly equipped non-PHEV Eclipse Exceed.

Eclipse Cross PHEV has a 10 year / 200,000 km warranty on most of the vehicle provided that all servicing is done by Mitsubishi dealerships. Otherwise, the warranty reverts to five years and 100,000 km. The warranty on the EV drive battery is eight years or 160,000 km.

STYLING
The Eclipse Cross PHEV has the same shape as the rest of the non-PHEV range. Thus, it has the latest iteration of the very large grille that flows neatly into multiple LED lights and back into sides of the bonnet. There’s a flowing coupe-like roofline which gives it an attractive and stylish profile. Badges on the front doors proudly boast that it’s a “Plug-in Hybrid EV” 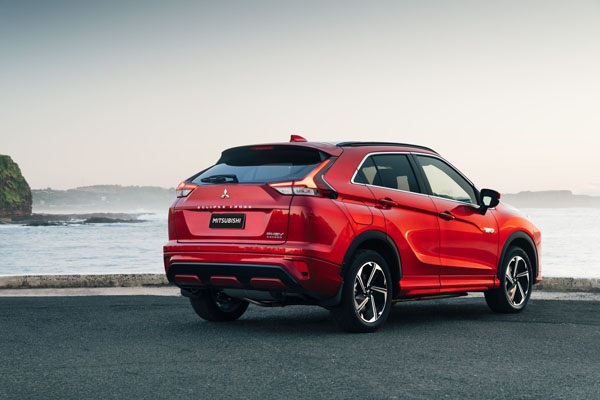 INTERIOR
The interior of the Eclipse Cross has a neat and functional design with most features easily accessible. The instrument panel has carbon and piano black accents as do the steering wheel, centre console and door panels. The lower dash, centre console, arm rests and air vents all have a high finish silver trim.

INFOTAINMENT
The multimedia system uses the Mitsubishi Smartphone Link Display Audio connectivity system and displayed on an 8.0-inch colour touchscreen at the top of the dashboard. The buttons are large and conveniently positioned for driver access.

Apple CarPlay and Android Auto compatibility comes standard on all models although they are plug-in rather than wireless. Digital Audio Broadcast is also standard, but we had the too-common problem of it dropping out.

POWERTRAIN
The powertrain in the Eclipse Cross is the latest iteration of the technology used in the Mitsubishi Outlander PHEV. Mitsubishi boasts that the Outlander PHEV is the world’s top-selling Plug-In Hybrid with more than 260,000 vehicles sold globally.

The petrol engine is able to recharge the battery as well as power the vehicle simultaneously.

The drive battery is a 13.8 kWh unit powering front and rear electric drive motors. It has an official all-electric range of 55km. 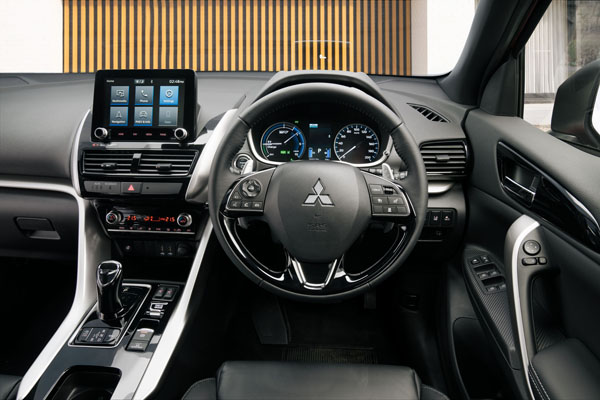 DRIVING
The powertrain provides drivers with the ability to drive solely on electric power around town. At higher speeds or on longer drives, the powertrain will switch to Series or Parallel Hybrid modes to boost the range whilst minimising fuel consumption.

When the destination is further afield, the hybrid modes employ the petrol engine to assist the battery or to directly drive the vehicle.

As mentioned, the petrol engine is able to recharge the battery as well as power the vehicle simultaneously.

Eclipse Cross is able to accelerate virtually instantly when there’s charge in the battery, a feature of all electric vehicles that we really like. Even when the battery was flat it sometimes picked up a bit of charge when slowing and/or when going down a hill.

It corners well for what it is and the fast throttle response give the driver even more control when fanging around bends. Okay, that’s not the sort of thing you do in a people moving SUV, but if Dad is out on his own who knows?

The cabin is quiet thanks to good sound reduction and, while not sedan-like, it’s not far from it.

SUMMING UP
Eclipse Cross is an excellent example of the long experience Mitsubishi has had with electric or partial electric vehicles. It’s not cheap and personally we’d rather save our money and buy a standard hybrid rather than a plugin one.