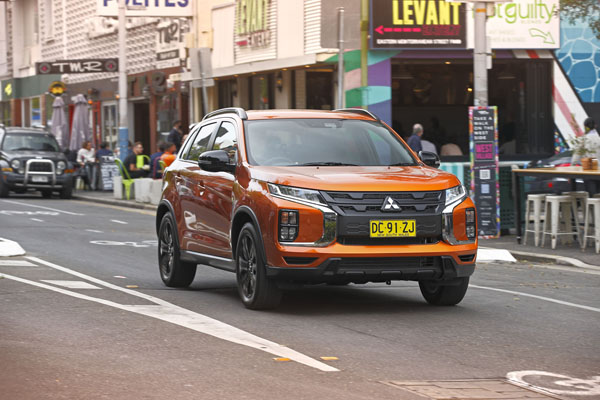 Mitsubishi ASX is the smallest vehicle in the company’s four-model SUV range beneath
the Eclipse Cross, Outlander and Pajero Sport.

ASX (the acronym stands for Active Sports Crossover, not Australian Stock Exchange!)
has been around since 2010 and competes against a host of rivals in the small SUV
category including Hyundai Kona; Mazda CX-30; Kia Seltos; Subaru XV; Toyota C-HR;
and the class sales leading MG ZS.

Despite being largely unchanged throughout the decade ASX has been a star performer
for Mitsubishi thanks to a combination of sensible design, functionality and sharp pricing.

As is the case with most vehicles in its class, ASX doesn’t have an all-wheel drive option
with drive going through the front wheels.

STYLING
With its styling looking somewhat dated a 2019 facelift for the ASX worked wonders with a
new bolder version of the Mitsubishi Dynamic Shield front end and other tweaks turning it
into one of the best-looking vehicles in its class.

The side and rear are largely unchanged except for a new bumper and taillights. 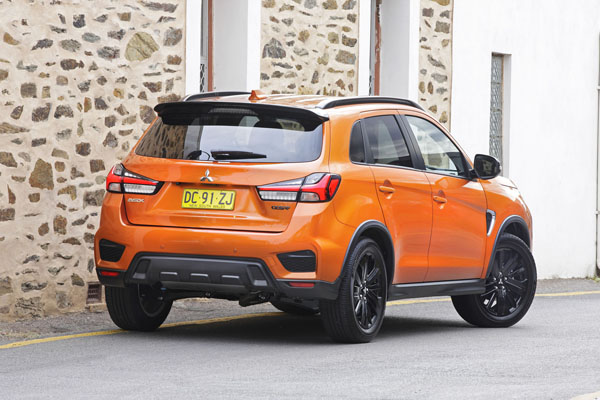 INTERIOR
Inside are black cloth headlining, microsuede and leather-look seats with red stitching. The
Exceed has leather seats.

ENGINES / TRANSMISSIONS
Going against the present trend towards turbocharging, both ASX engines are naturally
aspirated.

The ES manual has five speeds, while all other models have continuously variable
automatic transmission.

The entry-level ES can be ordered with an ADAS package which adds lane departure
warning; automatic dusk sensing headlights; blind spot warning; lane change assist; and
rear cross traffic alert. These features are not available in the MR but are standard in the
LS, GSR and Exceed.

INFOTAINMENT
All variants have an eight-inch touchscreen system in the top centre of the dashboard. It’s
clear and easy to read with only minimal distraction needed to operate. There’s also voice
activation. 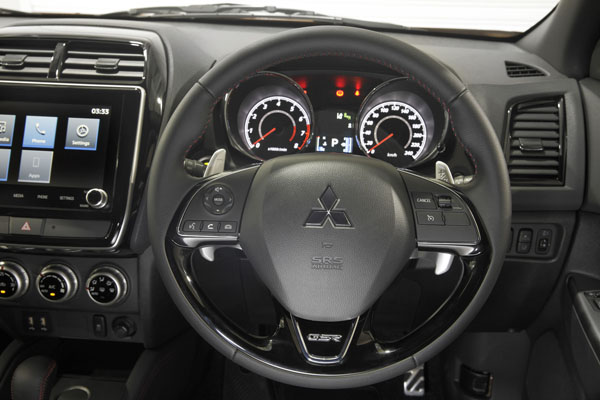 Bluetooth pairing is fast and intuitive and there’s smartphone mirroring through Apple
CarPlay or Android Auto along with DAB digital radio where available.

The Exceed gets a nine-speaker Rockford Fosgate premium sound system as well as
integrated satellite navigation. Other models get four- or six-speaker generic audio.

There are twin USB ports at the base of the centre console and two more in the rear.

DRIVING
Access is impressively easy and it has a spacious feel for a relatively small vehicle. Once
settled in, the front seats are well-shaped, supportive and comfortable.

Rear seat legroom is pretty good for all but more than six-foot passengers who will need
the usual compromise with those in front. Five can be carried but it’s better if the three in
the back are kids.

There’s good headroom in all seats, although that could be an issue with the panoramic
sunroof in the top-of-the-range Exceed.

Our test vehicle was the 2.4-litre GSR. The engine has plenty of grunt with just a hint of
torque steer if you flatten the throttle from a standing start. It’s nicely responsive, which we
like as it’s more pleasant to drive than the small displacement turbo-petrol engines that are
in vogue nowadays.

The drive is smooth and comfortable.

Steering has a pleasant nice feel and gives the driver good response. It’s no sports SUV,
though the engine almost puts it into that category at times. Cornering is simple and the
ASX generally follows the chosen line without you having to correct it midway through.

Road noise is generally well damped, but some stretches of Australia’s notorious coarse-
chip surfaces set up a fair bit of noise in the cabin.

Fuel consumption in the GSR is listed at 7.9 litres per 100 kilometres. During our usual mix
of urban and motorway conditions we averaged 8.7 L/100 km.

SUMMING UP
Although it’s gone 12 years without a new model Mitsubishi ASX continues to feel as
though it’s only a few years old with styling and technology updates and keen pricing
letting it keep pace with its many, much younger rivals.

It’s stylish, easy to drive and will appeal to both families with preteen children and retirees
alike.

Note that Mitsubishi is headlining its advertising with an industry-leading 10-year warranty.
It certainly sounds attractive on the surface but less so when you check the fine print
because not only is the 10-year deal dependent upon having your vehicles serviced
exclusively at its dealerships, but also the distance is limited at 200,000 km.

If you choose to have your servicing done elsewhere then the coverage drops down to five
years and 100,000 kilometres.