MG IN POSITION FOR POWER PLAY

Switched-on advocates of renewable energy generally agree that the ‘crossover point’
when the cost of producing electric cars becomes the same as that of internal combustion
engine vehicles will be 2026 . . . maybe earlier.

In the meantime, automobile manufacturers repeatedly put their money where their mouth
is with full EVs and fossil fuel / electric hybrids. One such maker is MG, the erstwhile
British sports car icon now in the hands of the Chinese, and powering.

Indeed, MG is producing both hybrid and straight electric cars, with the latter ZS Essence,
at $44,990 driveaway, being the second most popular non-commercial EV in Australia,
after the tearaway Teslas.

The company is already making its way with the ZS all-electric small SUV and mid-size
petrol / electric hybrid, the HS, selling for $47,990 driveaway, $8000 above its non-hybrid
counterpart. The PHEV, recently re-named HS +EV, is the subject of this test.

A seven-year / unlimited kilometre warranty covers the car and lithium-ion battery, while
roadside assistance goes the same distance in time. Scheduled servicing comes around
every 12 months or 20,000 kilometres.

STYLING
The MG HS +EV ploughs mainly a lone SUV furrow, its nearest rival, the Mitsubishi
Outlander PHEV, being the next cheapest model, selling for $47,990, plus on-road costs.

The kit-out is considerable. Based on the top-of-the-range petrol-powered HS Essence
and Essence X, it includes panoramic sunroof and 360-degree view camera.

The HS +EV also incorporates a dynamic LED strip turn signal a la Audi / VW, often an
indicator of the premium status of a vehicle, while the overall look sticks generally to the
mid-size SUV script.

Fancy, chrome grille highlights follow the cues set by traditional ‘stars’ of the SUV
segment, while in profile, curved lines link up with a neat and tidy rear end.

Soft-touch surfaces with contrasting stitching add a touch of prestige, not anathema to the
traditional MG sports car enthusiast. There’s no shortage of occupant space and storage is
ample, with bottle holders in each door. Up front are two USB ports and a phone tray at
the base of the centre stack, cupholders with roll-top cover and a good-size centre console
bin.

The back seat is spacious with good leg and headroom. Occupants get air vents and two
USB ports, as well as a fold-down armrest with cupholders. Luggage space adds up to
463 litres, or 1275 litres with the second-row seatbacks folded.

There’s a power tailgate for loading convenience, however, the ‘spare wheel’ is limited to a
puncture repair kit.

INFOTAINMENT
The touchscreen is a carry-over from other HS variants, while a new 12.3-inch digital
instrument cluster, replaces the partially digital cluster of the petrol models. Paddle shifters
are also absent, as is the Super Sport button. 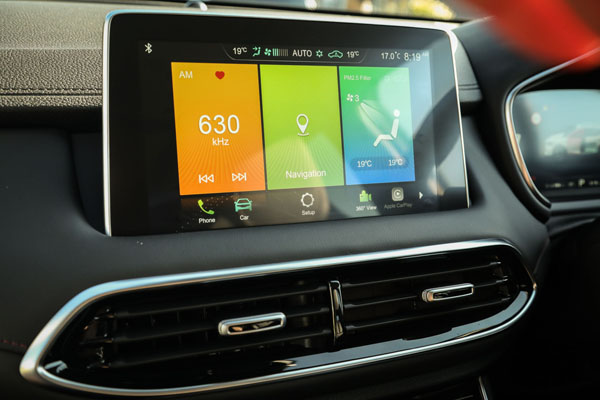 ENGINES / TRANSMISSIONS
MG HS PHEV power is the result of a combined 1.5-litre turbo-petrol engine, putting out
189 kW of power and 250 Nm of torque and an electric motor attached to the front axle
producing 90 kW and 230 Nm.

Combined this adds up to 189 kW and 370 Nm. The lithium-ion battery, charging the
electric motor, has a 16.6 kWh capacity. Power is put to ground via a six-speed automatic
transmission.

SAFETY
The HS +EV has a top five-star safety rating based on testing from 2019 and like all
models comes with MG’s Pilot suite of safety gear.

Also, on hand are, front, front side and side curtain airbags, plus reversing camera and
rear parking sensors.

DRIVING
How does the MG HS +EV hybrid system work? When the battery charging the electric
motor drops below a critical level, the petrol engine comes into operation, powering the car
and helping to recharge the battery.

In EV mode, MG says, the car will travel on electricity alone for 63 kilometres before the
petrol engine kicks in. There are variables: how the car is driven and the intensity of
climate-control cooling or heating.

Being the height of a sub-tropical mid-summer, with cabin comfort on high cooling, best
figure the test car recorded was 5.9 litres per 100 kilometres.

The hybrid is relatively quiet and smooth in operation, with only a low turbo whistle from
the petrol motor, a whirr in EV mode and a nominal note when shifting between systems.

Ride is relatively smooth in most road conditions, but with weight concentrated up front
steering can be somewhat heavy. The brake pedal needs firm handling too.

As far as battery charging is concerned, the HS EV comes only with a Type 2 AC (slow)
plug, with the maker claiming five hours to fully charge the battery from a 7-kW fixed home
wall charger.

SUMMARY
With petrol prices soaring, anything that relies less on that stuff for getting around is worth
a look. Without the initial expense of going fully electric, plus suffering bouts of ‘range
anxiety’, the MG HS plug-in electric vehicle could be something to consider.