Mercedes-Benz M-Class first arrived in Australia in September 1998 and sold well from the
start. These older ones are getting on in years and may be past their use-by date.
However, one that has been serviced by the book, driven correctly and has never been in
off-road may still be in very good condition.

Most are bought as upmarket station wagons rather than a 4WD, though there’s a
package for those who want to get really serious in off-road situations – more about it in a
moment.

There’s plenty of interior space in the boot is a good size, well-shaped and easy to load.

The first M-Class model had body-on-chassis construction, all others have a monocoque
body with some underbody strengthening to make it more suited to off-road running.

These first models are slightly smaller, and significantly less stylish than later ones. Build
quality was poor in the early days, those from the early 2000 update are noticeably better
than the originals.

The high centre of gravity when compared to a car reduces the cornering ability of an M-
Class. However, electronic stability aids make them hold the road remarkably well. Indeed,
the M-class corners safely at speeds well in excess of those likely to be attempted by the
average owner. 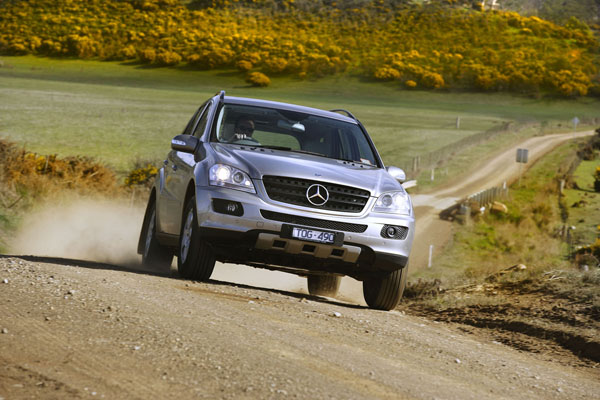 A second-generation model replaced the original in April 2006, it received a facelift and
upgraded mechanical components in January 2008. The gen-three arrived in Australia in
April 2012. Each version increased the stylishness of the vehicle, but put ever more
emphasis on on-road performance.

Mercedes-Benz offers a staggering range of four- six- and eight-cylinder engines with
naturally-aspirated petrol, turbo-petrol and turbo-diesel setups. The turbo-diesels are
generally the favourites, but those who like a bit more driving pleasure the V8s are the ride
of choice.

At the top of the performance tree are the Mercedes-AMG variants of the M-Class. We
won’t cover these here as they deserve a Checkout in their own right and will be covered
later.

Seven-speed automatic transmissions are fitted to all M-Class vehicles from 2006. One
with a manual gearbox is likely to have been imported from Europe and could prove a real
hassle at resale time.

If do want to get seriously down and dirty the Mercedes Off-Road Pro packages work well.
The package adds adjustable ride height and a two-speed transfer case as well as
numerous other smaller items.

Mercedes M-Class was renamed the Mercedes GLE in 2015. The Mercedes-Benz dealer network has been well established in Australia for many
decades. As is the norm, most are in metro areas, but there’s a decent number out of town
as well, the latter thanks to the popularity of diesel Mercs, cars and SUVs, in the bush as
well.

Spare parts aren’t overly expensive for what the vehicle is. But if you’re upgrading from a
less prestigious vehicle it might be an idea to do so price comparisons before falling in love
with a Mercedes.

Insurance charges are reasonable for an imported German luxury vehicle, reflecting some
of the cost cutting that has gone into the manufacture of the M-class. It’s made in the USA
and, relatively speaking, is built down to a price.

Few vehicles are more popular on the Australian used-car market than Mercedes-Benzes
with full service records. You will almost certainly be asked to pay more, but smart buyers
say they are worth the additional outlay.

Do preliminary inspections to the best of your ability then call on the services of a
professional before committing. A Mercedes-Benz trained person is the best, motoring
association inspectors are the second choice for most potential buyers.

WHAT TO LOOK FOR
Clues to off-road use are light scratches to the body sides, scars on bumper corners and
scrapes on the underbody protection plates.

Make sure the engine starts easily, modern turbo-diesels only take a second or two on the
glow plugs and any longer could indicate a problem.

Feel for the engine idling smoothly from the moment it fires up.

The engine pulls strongly without any initial hesitation. Turbo units will have a little lag,
make sure you understand what to feel for, or call in a professional who does.

The automatic transmission should work almost imperceptibly, even when worked hard.

Have a good look over the interior, including the luggage area. The latter may have been
knocked about if items have been tossed about if not packed in correctly.

CAR BUYING TIP
Spend time deciding what type of vehicle you want rather than just jumping into what first
comes to mind.