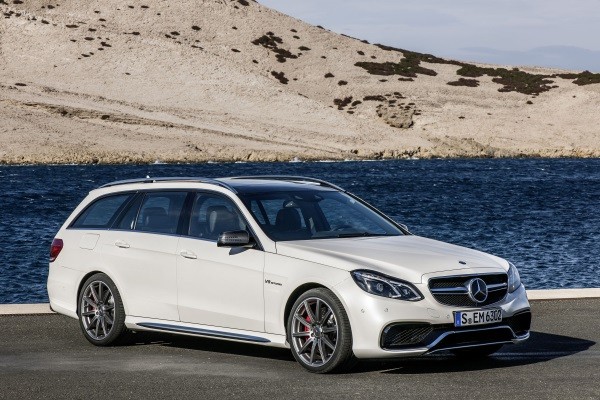 The AMG E63 S replaces two former models available in Australia: the E63 and the E63 Performance Pack. These variants had respective outputs of 386 kW and 410 kW, so at 430 kW the uprated E63 S blitzes both in power from the same 5.5-litre twin-turbocharged V8. Power is put to the rear wheels – Aussie AMG fanatics would have it no other way – via a seven-speed dual-clutch transmission manufactured by Mercedes-Benz.    AMG have mastered the art of understatement. This looks like a gentleman’s car. Yes, there are little AMG hints here and there: 19-inch AMG wheels, a front apron, front splitter, rear diffuser and side sill panels with inserts of silver chrome and perhaps the most telling of all, the AMG sports exhaust system with two chromed twin tailpipes.

Then there are the bright red brake calipers that peek out through the AMG wheels. They’re 360mm discs front and back with six-piston front and four-piston rear calipers. The interior also has quite a few AMG hints including the AMG emblem embossed into the front head restraints and the AMG-specific IWC-design Swiss analogue clock in the centre of the dash.   At $249,900 the AMG E63 is a luxury powerhouse. A combination of the luxury we associate with one of the world’s great car makers is combined with power so brutal from a drivetrain that is not that distant in power and torque from an Australian racing V8 Supercar. The figures speak for themselves: 430 kW of power and 800 Nm of torque. A bit less power and a bit more torque than the brutes that visit Bathurst once a year in October for a world-famous 1000 km race.   Yet, if you owned this motoring split personality you could give the keys to your grandmother for a trip to the shops. We can’t say that we’d recommend that favour for the younger members of the family as the performance might prove uncomfortably close to temptation.

The new AMG E63 S covers the sprint in 4.1 seconds flat, falling just two tenths of a second short of supercar status, which is generally set at three-point-something seconds for the zero to 100 km/h.   It’s under the skin that AMG – Mercedes-Benz’s performance division – has worked it’s magic. There is now a standard AMG rear axle differential lock to harness the grunt and keep things tidy under pressure. The locking diff came only with the performance package in the previous model, but is now standard.

The E63 AMG’s interior is all-luxury, although again it is understated but has a strong club-feel thanks to perforated Nappa leather upholstery, stitched leather dash and faux leather around the rest of the cabin and a refined finish that abounds throughout. Ultimately though, the AMG E63 S is about performance. 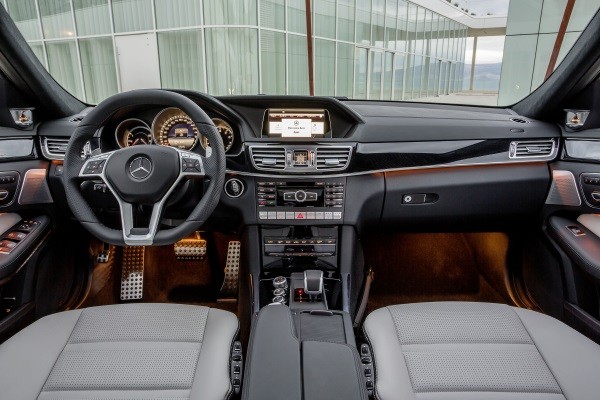 Our test drive was conducted out of Melbourne, north east to Yea township and returning to Tullamarine Airport along quiet, twisting roads interspersed with a few long straights, tight bush roads with tarmac and some steep hills – not that those were acknowledged by the E63 S that treated them with snobbish disdain. In athletics parlance this E-Class AMG simply never works up a sweat. We could only see that happening on a race track.

The dual-clutch seven-speed shifter handles the power with precision under full load with changes passing in the blink of an eye as the engine emits a throaty burble. The shifter has undergone AMG treatment and is called the Speedshift MCT Seven-speed Sports and has four driving modes and race start function. Add to that the high-performance braking system and 3-stage ESP plus tyre monitoring system and the package sits atop the E-Class tree.

It may fall a tad short of the accepted supercar mark, but for now it is king of the high performance sedans from the German luxury-performance trio of Audi, BMW and Mercedes-Benz.

The E63 S AMG is expected to sell about 100 units a year in Australia. With on-roads the bottom line will grow to around $265,000, depending on the state in which you live, so check with your local Mercedes-Benz dealer for the exact driveaway price.