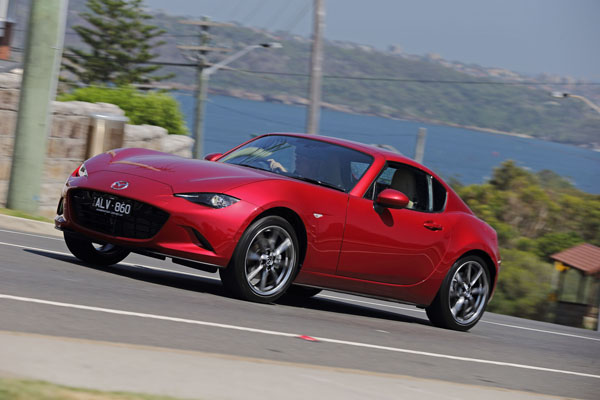 The fascinating Mazda MX-5 RF (Retractable Fastback) has finally arrived in Australia. Even before it hit our shores it had already attracted a lot of interest and many have put down deposits to be first to get themselves into one.

A few months ago Mazda MX-5 program manager Nobuhiro Yamamoto visited us in Australia and told us the retractable hardtop accounted for more than half of all NC (third generation) MX-5s sold because it offered all-season comfort. The fourth-generation retractable hardtop model embodies the core value of Lots of Fun.

Mazda Australia is highly regarded by head office in Japan. For the launch of the RF design chief Masashi Nakayama attended to describe his work visually by way of fascinating drawings he did on the spot, as well as a walk around the car.

To our eyes the MX-5 RF will sell on style alone. It takes the neat and tidy look of the rear end of the soft-top and transforms it into a very attractive fastback coupe. Of particularly interest is the ‘flying buttress’ look with the sides of the roof extending past the rear window, then cutting back forward in a distinctive manner.

Having just test driven the RF and previously the soft-top we can report the RF certainly attracted a greater degree of attention.

The folding hardtop consists of a front roof, middle roof, rear roof and back window glass. When the roof is opened, the front and middle roof sections are stowed together with the back window glass in the space behind the seats. It can be powered open and closed at speeds of up to10 km/h, not much more than walking pace, but at least it lets you make an impression when driving in and out of carparks.

No boot space is lost so the little Mazda still has a reasonable volume of 130 litres, enough for two cabin bags or several soft items of luggage.

Unlike the open-top Mazda MX-5 roadster that comes with the choice of a 1.5 or 2.0-litre engine, the MX-5 uses only the larger engine in RF with its 118 kW and 200 Nm outputs. That’s probably due to it weighing 45 kg more than the soft-top. Straight line performance isn’t a big feature of the Mazda MX-5 and that extra weight may have been too much for the smaller engine. 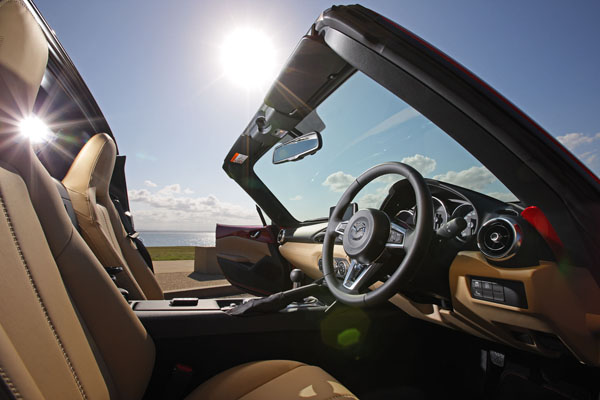 Drive is, of course, to the rear wheels. There’s a choice of a six-speed manual or six-speed automatic. We road tested both transmissions and it will come as no surprise that the slick-shifting, short-throw manual was our favourite.

Having said that the auto has fast changes and was usually in the right ratio. There’s a manual mode, but it reverts to auto again too often for our tastes. Paddle shifters ease the problem, but give us a ‘proper’ manual any day.

Our initial testing consisted of ‘real life’ driving – a traffic-clogged run north from Sydney airport, through tunnels chock-a-block with speed cameras. Motorway driving to the north west (more cameras!). Finally, at long last, onto the famed Bells Line of Road that leads out to Bathurst, once the favoured route for the annual Bathurst 500 racing cars back in the days when real cars were used in the race. This road has a beautiful mix of corners, climbs, descents, uneven surfaces. Perfect conditions for the MX-5.

The suspension and steering systems have been tuned specifically for the RF. Handling remains as sublime as ever. There’s something addictive about the way this little Mazda sportscar seems to fit around your body and responds to your thoughts. It does exactly what you want when you want it and is sure to bring grins to the face of those who love driving.

Throttle control is spot on and the steering provides just the right amount of feedback.

A sound-absorbing headliner used on the inside of the front and middle roof panels combines with sound insulation around the rear wheel housings. This gives a quieter ride when the roof is closed, perhaps not luxury sedan like, but impressively quiet.

With the roof open there was a fair bit of buffeting in the strong, very hot, crosswinds during the heatwave conditions. We couldn’t do back to back runs with a soft-top but suspect it would be more enjoyable than RF in those conditions.

Rather than being a true convertible with the top open and the windows down the Mazda MX-5 RF really has the feel of a large sunroof with no bodywork between the windscreen and rear area.

Which would we prefer to live with on a daily basis? We’re still not sure – get out to a Mazda dealer for a drive and see what you think. But don’t wait too long there’s likely to be a big rush…