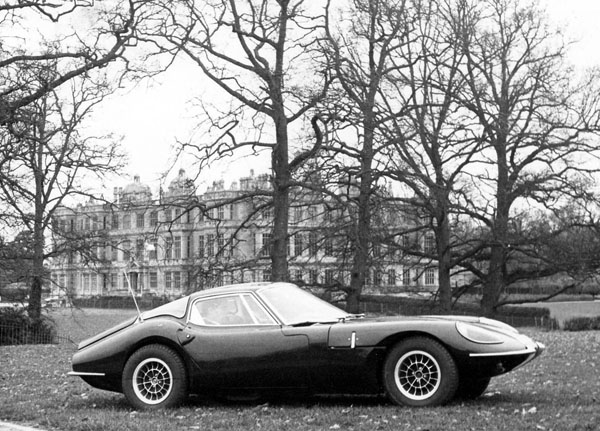 Wood has seldom been used for the structural and stress-bearing parts of a motor car but in the Marcos, first appearing in 1959, timber was used for the chassis/hull, taking maximum advantage of improved techniques in plywood construction.

The name Marcos was derived from the surnames of Jem Marsh and Frank Costin, and was first fitted to a cycle-winged car. Production versions, however, employed full-width styling. Ford engines of the 100E, 105E and 109E varieties were offered and although these could be, and were indeed, tuned, the excellent performance came as much from the remarkably light weight as from any other source.

A larger model appeared in 1964, which set new styling standards, and in its various guises was to form the basis of the Marcos range of models for the next decade. It was offered initially with the four-cylinder Volvo engine but, from 1966, Ford engines were made available. The in-line engine was used in 1500, 1600 and 1650 cc Lawrencetune form and, from 1969, the 2.0-litre V-4 was employed.

Whilst the firm grew it eventually succumbed to a financial crisis and was later resuscitated by a wealthy backer and prepared to set up in new premises. The Adams brothers took charge of the company’s move to Bradford-on-Avon.

In December 1962 Marcos Cars Ltd started production in their new premises with Jem Marsh still one of the directors. Jem realised that by producing cars accepted as racing cars their production would always be limited. For this reason it was decided to make road-going versions of the Marcos Spyder which Peter Adams had devised earlier. A little later Dennis Adams produced sketches of what people generally think of as a Marcos.

The Marcos 1800 was well on the way to what the Adams brothers produced in the self-indulgent Probe series of cars in the early seventies. The Costin principles of wooden construction were retained but extended and modified in almost every way. A glass fibre body was fitted. The Adams brothers had wanted to produce their own Marcos engine and complete suspension but were precluded by financial constraints, so proprietary components were used. As Dennis said later “On all counts of weight, power, torque, size, revs and even tuning potential, the boring Volvo 1800 unit came out tops”.

Here at last was a Marcos that appealed to the non-racing customer although, of course, they were still raced. The Adams rear suspension was not successful and rather than try and modify it to overcome problems the firm reverted to a live rear axle constructed from Ford parts. Other changes that took place progressively were the fitting of engines other than the Volvo 1800. Ford straight-four 1600, 2.0-litre V-4, 2.5- and 3.0-litre V-6 units, plus Triumph 2.5-litre and Volvo straight-six 3.0-litre units all found their way at various times into the engine bay.

Later a further series of financial setbacks put the company into receivership. In 1976 Jem Marsh was able to buy back the Marcos name and moulds, which had languished in various hands since 1972. With a considerably modified outlook on the car manufacturing business, and very aware of the dangers of over-expansion, Marsh began production again in 1981. The revitalised company limited its production to two or three kits per week.