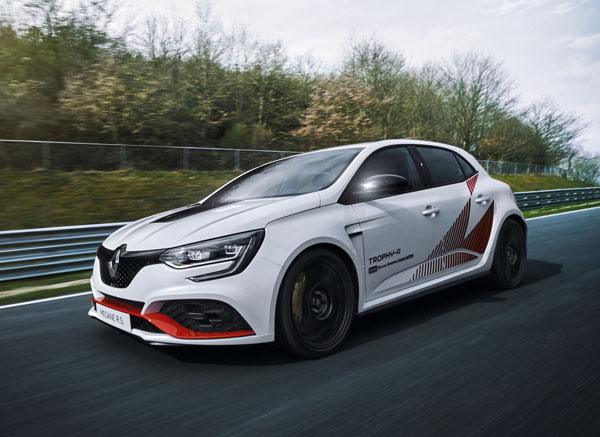 Renault has opened pre-sale orders for a new limited edition of its Megane R.S. Trophy-R hot hatch which, according to the company, is the highest performance production car the French carmaker has ever sold.

Australia has historically been one of Renault’s biggest markets for the Megane R.S. and, with global numbers extremely limited to 500, 20 units will be sent here, all in pearl white with red trim. Orders can be secured by deposit through a brand new online sales portal at the Renault website (www.renault.com.au/).

In addition, one Megane R.S. Trophy-R Record version will be imported and go on sale at a later date via a public auction. The Record added to the name refers to the car’s record-breaking lap by a front-wheel drive production car on the Nordschleife at Nurburgring set in April this year.

The Trophy-R has the same 224 kW (300 horsepower) engine as the standard Trophy model but with a 130 kg weight reduction including 40 kg from not having all-wheel drive.

Announcing the decision to import the company’s new star performer Renault Australia’s managing director Anouk Poelmann said: “It is important that every Australian, regardless of their location, is given the opportunity to be part of the exclusive Megane R.S. Trophy-R club and it is for this reason we have made the decision to bring the car to market in this new and exciting way for Renault Australia.”