In 1989 the Lexus LS400 was the first Japanese car to tackle the upmarket German machines Mercedes S-Class, BMW 7 Series and Audi A8 head on. Jaguar’s XJ was also in Toyota’s sights (Lexus is controlled by Toyota), though the British marque wasn’t doing particularly well at that time.

Lexus tells us ‘LS’ stands for Luxury Sports, however there’s a lot more luxury than sport. Handling is certainly safe and secure but doesn’t provide the sporting enjoyment of the big name Germans and British sedans.

The most noticeable feature of the Lexus LS series is their near-silence and impressive ride comfort. Topline materials are used throughout and the cars are built to an immaculate standard. 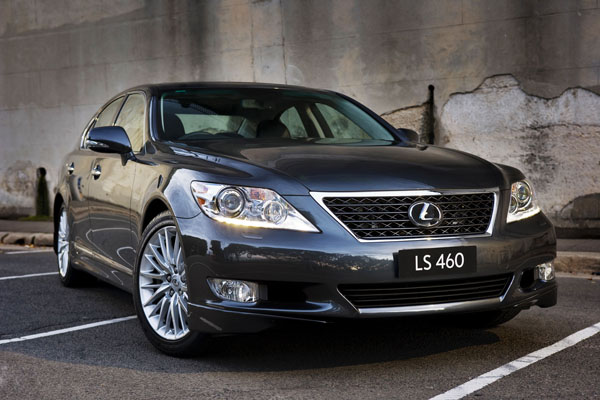 The LS400 was discontinued late in 2000, to be replaced by a near-new design in the LS430. That’s where we will begin this used-car report. In September 2003 a revised and upgraded version of the Lexus LS430 arrived in Australia. It has features such as doors that pull themselves closed, and door mirrors that automatically folded when you switch the ignition off.

There’s front-mounted radar on the cruise control. If heavy braking is required the Lexus sounds a gong to grab your attention. This was one of the early adopters of a reversing camera. And the electric motor that automatically powers down the sunscreen in the rear window when you engage reverse gear.

April 2007 saw the introduction of an all-new LS, the 460, with a larger V8 engine. The numbers in the title refers to the capacity of the engine in decilitres.

All engines are whisper quiet and produce plenty of power with virtually instantaneous throttle response. They are reasonably economical, indeed pretty good considering the size of the car, and in the early Lexus LS are noticeably better than the Europeans. The Euros caught up later, but there’s a pretty good chance the bought and dismantled the Lexus V8s as part of their research.

It comes as a surprise to some non-motoring people that Lexus V8 engines are popular with those building hotrods and some racing cars. They really are impressive powerplants.

A hybrid Lexus LS600hL was introduced in November 2007. The ‘600’ doesn’t mean there’s a 6.0-litre engine under the bonnet (pity!) but that Lexus considers the hybrid has the sort of performance that would normally require a 6.0-litre unit. The ‘L’ in the title announces this is a limousine, with a longer wheelbase than the standard Lexus LS460.

Most LS600hL models were imported with an upper-luxury layout featuring just two business-class seats in the rear, though you could get a more conventional three-seat bench if you desire. A timber-trimmed console between the two seats contains controls for the Mark Levinson audio system as well as the inbuilt DVD player, climate control and other minor functions.

Dealerships that specialise in the Lexus marque are relatively scarce and tend to be confined to capital cities and major country cities. The Toyota network can assist Lexus owners as some senior technicians are trained on it. (Lexus is the upmarket division of Toyota, though, oddly, Lexuses were sold as Toyotas in Japan for many years.)

Insurance isn’t likely to be overly expensive in comparison with the high price of the Lexus LS, and is generally in the same grouping as the big-three German marques.

Many used cars are bought from a Lexus dealership and have been serviced by that, or another, Lexus dealer. These tend to be more expensive, but smart buyers consider it a good move.

Lexus LS that are bought new come with an Encore Lifestyle Package, Buyers of used LSs up to five years old and bought from a Lexus dealer receive the same benefits. These includes such things as complimentary service pick up and delivery of the car and roadside assistance. On the social side are priority ticketing service at some cultural centres, golf days and a luxury travel service. These benefits may change from time to time so contact your local Lexus dealer for the latest details.

WHAT TO LOOK FOR
It should be considered essential to have ’s smart to have a Lexus LS inspected by a Lexus technician at a dealership. Some senior Toyota mechanics are trained on the car and may be able to help if you’re in an area remote from Lexus.

Check for damage to the bodywork and the interior trim and remember the car should be close to immaculate in all areas unless it is one of the oldest models. Even then, we would expect the car to be in very good condition inside.

Look over the complete vehicle, testing each of the functions using the owner’s manual to work out exactly how everything should operate.

Make sure the engine starts virtually immediately and accelerates without hesitation even when it is cold. Look for a puff of oily smoke from the exhaust when you accelerate hard after the engine has been running on a light load, or idling, for a while.

CAR BUYING TIP
Arranging finance and insurance before you buy a car can often help you push through better deals on both items.