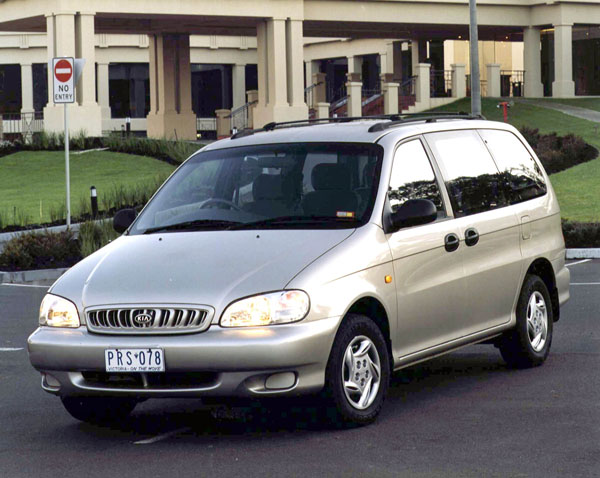 Kia Carnival is a South Korean seven- or eight-seat people mover that’s been on sale in Australia since September 1999. Well priced and strongly built it has been a big seller in its class for many years. The older models are getting on in years so we suggest buying one from the new series from January 2006 as it’s significantly better than the model it superseded.

The Carnival has obviously been built down to a price. It improved noticeably as years went by. Quality is generally fine in the body but interior appointments can be a letdown in older variants.

The big Carnival has good passenger legroom for seven adults, though four adults and three children is a more realistic load. It has a decent luggage compartment, though space in the back is rather limited if the vehicle is set up with child seats.

A major revamp of the Carnival late in 2001 saw the seating arrangement modified, and the rear hatch widened to give improved access to the luggage area. At the same time the frontal styling became more conventional and less ‘Korean’.

A virtually all-new model called the Kia Grand Carnival arrived in November 2006. Originally sold only in long-wheelbase format it was marketed alongside the existing model. That changed in February 2007 when the standard-wheelbase Grand arrived.

There’s lots of space inside the LWB Grand Carnival, with seating for eight adults, two in front bucket seats; three in the second row, each in their own bucket seat; and a further three in a bench seat at the rear. All seats have good legroom and are of decent width.

Kia Carnival latest model, from January 2015 is almost an eight seat sedan, not an old-style people mover. It’s still relatively rare on the used-car market, but if your budget will stand the strain it worth hunting one down.

Carnival has the advantage of being powered by a six-cylinder engine in a market segment where four-cylinder units are far more common. The original models had a V6 of 2.5-litre capacity. The engine is smooth and refined but doesn’t have a huge amount of power as it’s relatively small for a vehicle of this size. If you are going to be carrying a load of people and live in a hilly area it might be worth trying the performance of the engine for yourself.

The engine size went up to 2.7 litres in August 2006 and this powerplant is the one to aim for if your budget is up to it.

The Kia Grand Carnival, sold from January 2006, has a 3.8-litre V8. It obviously gives a fair bit more performance than the smaller units. The all-new Carnival of 2015 has a thoroughly modern 3.3-litre V6 petrol. It’s also offered with a big torque four-cylinder 2.2-litre turbo-diesel.Automatic transmissions are by far the most common in the Kia Carnival, but there’s also a five-speed manual on offer in some older variants. The latter isn’t all that popular on the used-car market and could be hard to resell down the track.

Interior comfort is generally good on good to moderate roads, but can deteriorate if the road surface is bumpy. A fair bit of tyre noise gets into the cabin on some surfaces, particularly concrete motorways. The Grand Carnival is much better than the first series vehicles in this respect. But these are low cost vehicles so don’t expect miracles in the NVH department.

Handling is on the ordinary side. Carnival likes to understeer if you go at anything more than a modest pace. The Grand is noticeably better as is the all-new model from 2015.

Kia has an ever increasing number of dealers in Australia although they tend to be concentrated in the major population centres, both in capital cities and country cities.

We have heard of no real complaints about parts availability and spare parts prices are generally reasonable.

Carnival isn’t too difficult to work on, with most of its major mechanical components being relatively easy to reach. However we recommend that only those who know what they are doing should work on the vehicle. Never tackle safety related areas unless you’re a professional.

Insurance is generally towards the bottom end of the scale, as befits a vehicle that’s not going to be driven hard and fast. There seems to be a larger than average differential between in premium charges so you may find it worthwhile to shop around. When doing so it always makes a lot of sense to make sure you are doing an exact comparison in what’s covered and what’s not before making your final decision.

WHAT TO LOOK FOR
We have seen some Kia Carnivals being used as taxis and shuttle buses, even as a courier vehicle. Beware big mileage vehicles.

Look over the interior for signs of harsh treatment caused by bored kids. Don’t forget the load area it can also suffer from less than caring loading.

An excess of brake dust on the inside of the wheels can indicate hard driving, something that’s unusual in a vehicle in this class, and probably a good reason for passing up a Carnival and finding another one instead.

Look at the condition of the front wheels and tyres, damage is often an indication of their being thumped against kerbs by careless drivers.

Make sure the automatic transmission goes into Drive without too much delay and changes gears promptly and cleanly. If it doesn’t, get a professional’s opinion.

Watch for body damage and/or previous repairs. Mismatched paint and rippled panels are reasonably easy to spot. If possible do this inspection in strong light and view the panels along their length to get the best angle on any imperfections.

CAR BUYING TIP
Your secondhand (or new) car may be temporarily covered by your existing car’s insurance, but ask the insurance company before you even think of driving it away from the dealer’s.