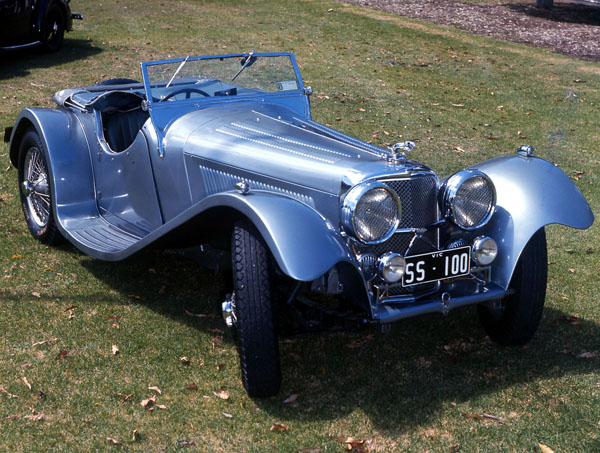 Most people are aware that Jaguar Cars Limited started as a little company making sidecars in Blackpool. Founder of the Swallow Sidecar Company was William Walmsley, but it did not begin to expand until he was joined by a far-sighted and ambitious young car salesman, William Lyons, who built up a clientele for special two-seater bodies on Austin Seven chassis.

The introduction of the SS1 at the 1931 Olympia Show was a turning point because, for the first time, the company became producers of a complete car. Admittedly the mechanical parts came from the Standard Motor Company but the chassis was specially adapted for the Swallow. A year later Standard, who were moving over to underslung chassis for their smaller models, produced a special long 3.28-metre wheelbase chassis for Swallow which gave the SS1 a lower top and four real seats. The 1932-33 chassis is an important one because it was destined to stay with the SS until the introduction of the steel-bodied Jaguar in 1938.

In 1933 the Swallow Coachbuilding Company built a short series of sports two-seaters for competition-minded customers. Powered by the tuned side-valve engines and with cut-and-shut SS1 chassis frames, these were endowed with exciting two-seater, slab tank bodies with flared wings and given the designation SS90.

The story of the Jaguar SS100 really began with the introduction of the SS90, very similar in appearance to the later model except that the prototype had a sloping tail into which the spare wheel was recessed. Whereas the SS90 was based on the components of the Standard Motor Company, but with a modified chassis and the 73 mm x 106 mm, 2664 cc 15kW side valve engine, the new SS100 ran on a more advanced box-section cruciform-braced chassis built by Rubery Owen to a Jaguar design with infinitely superior Girling rod brakes acting on large 380 mm drums. And although Standard continued to build the engine for Jaguar, it boasted a conversion to overhead valves evolved by Harry Westlake.

This unit already had a stiff bottom end, with a strong seven-bearing crankshaft and was well able to take the power which, with twin SU carburettors, was said to be around 76 kW at 4600 rpm. Both chassis and Westlake-modified engine were to remain with Jaguar until 1948.

Despite the reluctance of the company to support competition, S H Newsome, one of the earliest Jaguar dealers, entered a modified SS100 for Shelsley Walsh where it proved to be the fastest non-supercharged car in its class. A 3.5-litre version of the car was made available to the public in 1938. Both bore and stroke were increased, to 82 mm and 110 mm respectively and with, again, twin SU carburettors maximum power was 93 kW at 4250 rpm. Newsome’s highly modified 3.5-litre was said to develop 160bhp with a compression ratio variously quoted as 12.5:1 or 11.1:1, and in 1937 won a Long Handicap at Brooklands at an average speed of 180 km/h, and a fastest lap of 189 km/h.

It is easy to understand how popular SS100s were among the sporting motorists of the time because they gave all of the performance of cars costing many times their price with considerable reliability and very modest service costs.