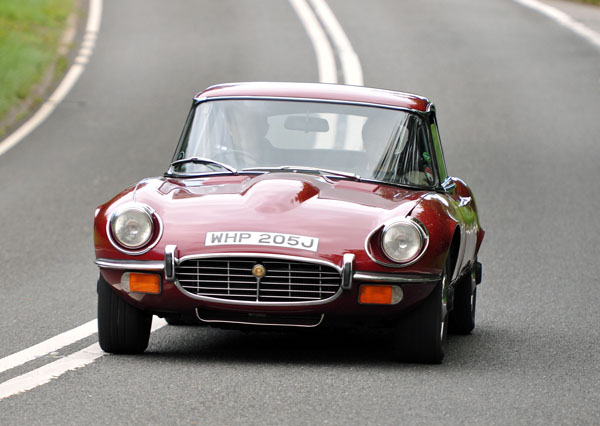 To many motoring fans the E-Type Jaguar is just as sensational a car today as it was when first introduced back in 1961. It said as much about the ‘Swinging Sixties’ as the Beatles or the mini-skirt. It was vivacious, sensuous, shocking and fast. But a sign of its greatness was that it was no passing fad. Over the years the love affair between this beautiful sports car and enthusiasts everywhere has endured.

The E-Type took the D-Type concept and adapted it for the road, making its level of performance available to the man in the street. Open and closed body styles were offered, both being strictly two-seaters. The interior was perhaps a little stark by Jaguar standards, but it was in keeping with the uncompromisingly sporting image of the ‘E’.

In spite of considering 3.0-litre and 3.4-litre engines, Jaguar launched the ‘E’ with the 3.8-litre unit fitted with three SU carburettors that had been developed for the ‘S’ version of the XK 150. Helped by its more aerodynamic shape and lighter construction, the new car had a considerably higher top speed than the XK 150. Acceleration was vivid but, thanks to the new rear suspension, the ride was excellent. For this level of performance the braking, even with discs all round, was barely adequate and the gearbox was considered slow; but these shortcomings were forgotten amid the outstanding qualities of what was true ‘classic’ from the day it was launched.

The Open version, known more often these days as the Roadster, was a strict two-seater with a folding hood and optional hardtop. The fixed head had a fastback roofline and opening tailgate. It, too, was a strict two-seater, but it had more room for luggage. Opinion is divided as to which is the prettier, though perhaps rather more people favour the Open. The Fixed Head, however, has suffered the ravages of time rather better, owing to the added strength of the roof section, which lets in less water.

The 1962 production cars featured a number of small but significant improvements. To suit taller drivers a footwell was added to the floor; and a dish was put in the rear bulkhead which allowed the driver’s seat to be pushed further back. Bonnet locking was changed from an external ‘T’ bar to internal locks, the louvres on the bonnet, formerly a separate pressing, were changed to be an integral part of the bonnet top  these subtle differences serve to distinguish the very early cars, which have become highly treasured collectors’ items.