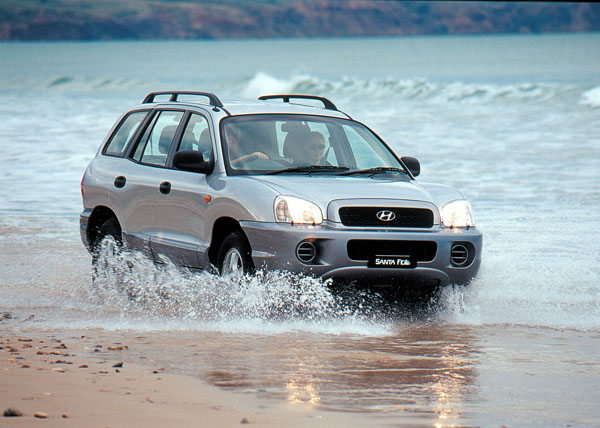 Hyundai Santa Fe is a large wagon that began as a real 4WD, not simply an SUV. The South Korean company understood the way buyer preferences were heading and it became a comfortable SUV, but retained some unsealed-road capability.

Hyundai Santa Fe first arrived in Australia in 2000. While some saw it’s somewhat over-the-top styling as a turn off others appreciated that the South Korean designers were having a go at being different.

However, the all-new and larger model, launched in 2006, took a safer styling path, being more mainstream. The change in shape paid off and there was considerably more buyer interest.

The third generation Santa Fe, reached us in October 2012. It is longer and wider than its predecessors, again it was marketed as a practical station wagon not a 4WD. It received a midlife makeover in November 2015 but as yet we haven’t seen any of these on the used-car market.

There’s good legroom in the rear of the original model, but some of that is due to limiting the legroom in the front seats. The Santa Fe from May 2006 was larger than its ancestors and a third-row seat option was offered as an option. 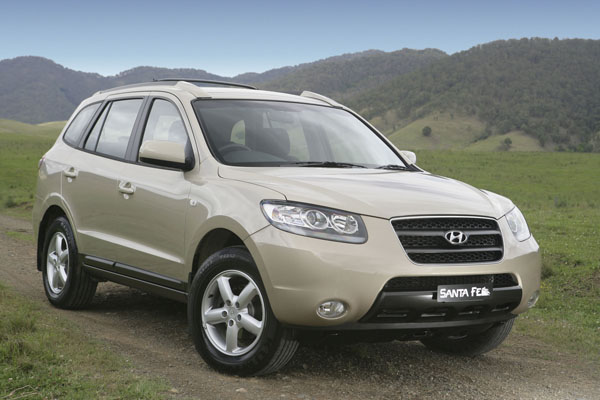 There’s good luggage space, including side bins and hidden storage space under the floor panel. As is common in this class the third row of seats steals a substantial amount of boot volume. A retractable blind and luggage net improve security and safety.

Ride comfort is generally good and was noticeably improved with each new model. Over the years more and more input from Australian suspension engineers was incorporated in the Santa Fe. Don’t expect a low-cost BMW or Merc, though. In the bush the Santa Fe copes well with corrugations on dirt roads. Off-road it provides pretty good comfort if the driver behaves in a commonsense way.

Santa Fe originally arrived only with a 2.7-litre V6 engine, but the range was expanded in 2001 when a four-cylinder 2.4-litre engine was added to the choice. But, the four-cylinder engine wasn’t all that popular and was taken off the Australian market towards the end of 2003.

From late 2006, Hyundai offered its Santa Fe with a turbo-diesel engine. The potential fuel savings make it worth hunting down.

Four-cylinder powerplants in the 2012 new-generation Santa Fe range are exceptional units, with big grunt in the petrol, and even more in the turbo-diesel. 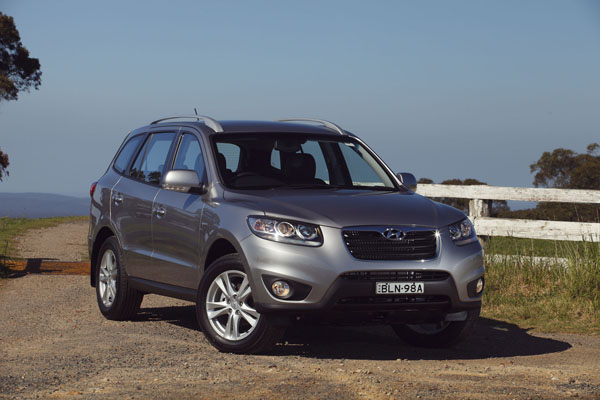 Santa Fe is simple in its mechanical design and the good home mechanic will find that they are able to do much of the work. It always pays to have a good workshop manual at hand. But please don’t attempt any safety related repairs unless you really know what you are doing.

The Hyundai dealer network is large. Dealers aren’t that common in the bush, but the number is growing steadily. Check your local area to make sure spares and service are on offer close handy.

Spare part prices are about average for this class and we seldom here of any real problems with them being in stock.

Insurance charges are moderate, though there does seem to be a bigger than average spread of premiums between companies. I’s worth taking the time to shop around for the best deal, as always make sure you do an accurate comparison.

WHAT TO LOOK FOR
Build quality is generally good, but there can be the occasional rough one.

Check that the engine starts easily, that it pulls well and doesn’t hesitate when accelerated suddenly.

Make sure the transmission operates smoothly and easily and that there are no funny noises from the driveshafts and universal joints.

Look over the interior for signs of it having had a hard time at the hands of uncaring children.

Look for fine scratches in the paint where a Santa Fe has been squeezed past branches during off road trips. Deeper scratches are likely to have been caused by trees or rocks and may require expensive panel repairs.

The body corners and doors sills are often the first to suffer. Also look at the protection plates under the engine for damage.

White stains on or under the body may be the residue of salt water picked up during a trip to the beach. Salt water can create corrosion very quickly if it gets under the paint.

CAR BUYING TIP
A magnet will be attracted to metal under paint, but not to plastic filler used as a cheap repair for minor damage.