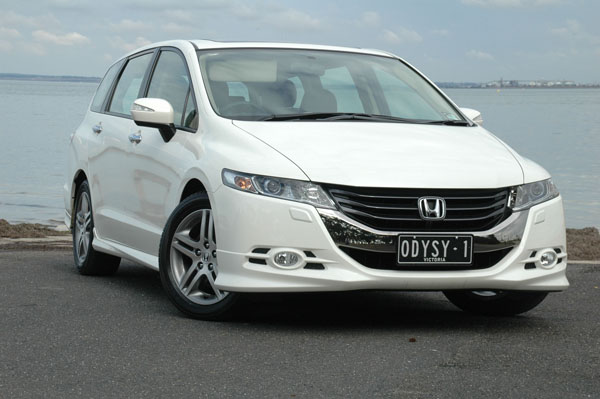 Honda Odyssey is a practical vehicle that makes a lot more sense than the large seven-seat SUVs. While the Odyssey doesn’t give its owner the feeling they can conquer the Simpson Desert, it does offer a smooth, quiet ride and excellent interior space.

In the fourth generation, where we pick up the long history of the Honda Odyssey, is actually lower than some station wagons. Inside it’s positively futuristic, with a sweeping-wave dash and instruments that sit in no fewer than four layers.

Access to the rearmost seats is easier than most, three-row-seat vehicles as the rear passenger doors go as far back as possible.

Boot space is quite good, but the amount of luggage space suffers if all seats are in use. The boot opening is larger than in the previous model, but there’s still more encroachment at the sides than we like.

Ride comfort and handling are better than the typical SUV’s due to its centre of gravity. 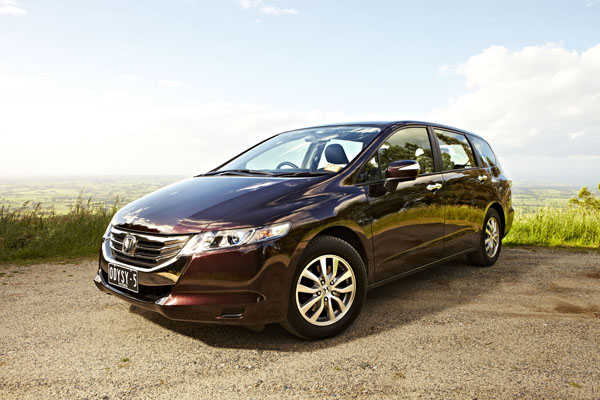 Finally bowing to pressure from those demanding SUV looks in their people movers, the fifth generation Honda Odyssey, launched in February 2014, was 150 mm taller and had a bold front with a huge chromed grille. It wasn’t quite SUV is shape but certainly tougher looking than Kia Carnival and Toyota Tarago in the people mover field.

t still didn’t grab a lot of buyers, but that wasn’t such a problem by this time as Honda CR-V was selling nicely, and a new Honda HR-V was in the final stages of development.

A bonus for some buyers was that the gen-five could be had with either seven or eight seats. Interestingly the rear doors were sliding types as in many other people movers.

Power in all Odysseys being reviewed here came from a four-cylinder 2.4-litre, that was improved steadily with each upgrade or new model.If you’re going to be carrying a lot of people, and driving in hilly areas you may find the Odyssey struggles at times. (The V6 engine offered in previous generation Odysseys wasn’t carried into the gen-four or beyond in Australia.)

Transmission is by a five-speed automatic in the gen-four Odyssey and was upgraded to a CVT with the gen-five.

Honda is long established in Australia and is well represented in metro areas, country cities and some larger country towns.

Spare parts prices in the commonly used items are often slightly lower than average and Honda’s reputation for expensive components has all but gone.

The Odyssey isn’t overly difficult to work on, but give it’s aimed at carting kids we really do suggest that professionals should be employed to do all but the most basic work.

Insurance premiums are generally on the low side as vehicles like this are almost invariably driven sensibly and have fewer than average claims.

For the 2018 season the Honda Odyssey got a facelift, an upgraded interior, revised suspension settings and improved driver assist technology. We haven’t seen any on the used market at this stage so we won’t cover it in this review.

WHAT TO LOOK FOR
Check the body for damage as these are bulky vehicles and may have suffered from carpark damage. Not to mention that caused by drivers getting things a little wrong.

Similarly, look for scars on the wheels that may have been kerbed. The front left is usually the one that cops it first.

Look inside the cabin for damage caused by careless children, or even kids that deliberately kick the seatbacks because they are angry/bored/malicious.

Some owners have complained of a rattle under the dash, but we haven’t experienced this.

The engine should start within a couple of seconds of being turned over, even when stone cold. After an overnight stop is ideal.

The conventional automatic used in the gen-four Odyssey should go into Drive or Reverse without hesitation. And change gears virtually imperceptibly.

The CVT auto on the gen-five should work smoothly at very low speeds, such as those in carparks. Once onto road it should be smooth in operation at all times.

Hard braking should be smooth and easy, with the Odyssey staying in a straight line. The brakes should never lock up.

CAR BUYING TIP
Before you take a used car for a test drive check that it’s undamaged. If there are any scars point them out to the seller so you don’t get blamed for it after your run.