HILUX IS UP TO TAKING ON TOUGH TIMES

As COVID-19 continues to cast its ugly spell over hapless humankind, it seems we will not be rubbing shoulders with the new Toyota HiLux anytime soon, plant closures around the world disrupting manufacture.

Toyota’s popular ute, or pick-up to be precise, is at the back end of its five-year cycle and badly needs to reinforce its spot at the top of the pile. In the meantime, the Japanese automotive giant is keen to keep potential buyers informed on what’s still on offer.

Launched Down Under at the end of 2015, the new vehicle, with local development and testing, was touted as the toughest HiLux ever. Since, it has fought its way to become the top selling vehicle in Australia.

STYLING
A deep front bumper contrasts with the thin upper grille and headlamps, while pronounced fenders give Hilux a solid and stable street stance. The large lower grille is pure Toyota styling and the front corners of the vehicle are raised to help avoid damage on rough roads.

LED headlights, standard on SR5 double cabs, are set off with ‘Hilux’ etched into the surround, while LED daytime running lamps consist of 12 individual white LEDs sitting across the top of the headlight assembly, eyebrow style, ensuring a high level of vehicle visibility.

Wiper blades, on the other hand, have been hidden away for a clean look, while windscreen washer nozzles sit below the bonnet line. On the other hand, it’s hard to miss the shiny sports bar behind the cabin. 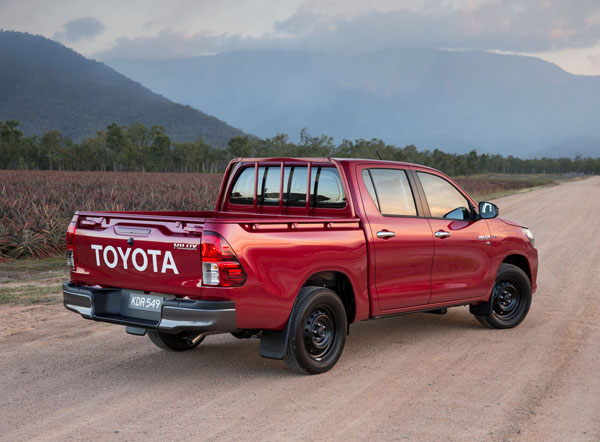 INTERIOR
A stylish, well-appointed interior is more SUV than workhorse, and quieter than before. Even so, rear-seat versatility includes 60:40 folding backs allowing space for carrying tools or other equipment.

The focus of the dashboard is a tablet-style touch-screen within easy reach of the driver and front passenger. Buttons on the steering wheel allow finger-tip control of the audio system and a hooked-up mobile phone, including voice recognition.

The SR5 goes one better with digital radio and satellite navigation giving drivers the option of being guided to destinations found through Toyota Link. Sadly, Apple CarPlay and Android Auto are absent.

ENGINES / TRANSMISSIONS
A new family of high-torque turbo-diesel engines is headed by a 2.8-litre version with maximum torque up to 450 Nm, 25 per cent better than the previous 3.0-litre engine.

Like all automatic Hilux models the SR5 incorporates a new six-speed electronically controlled transmission that uses artificial intelligence and other measures to augment the diesel engine’s improved performance and economy. 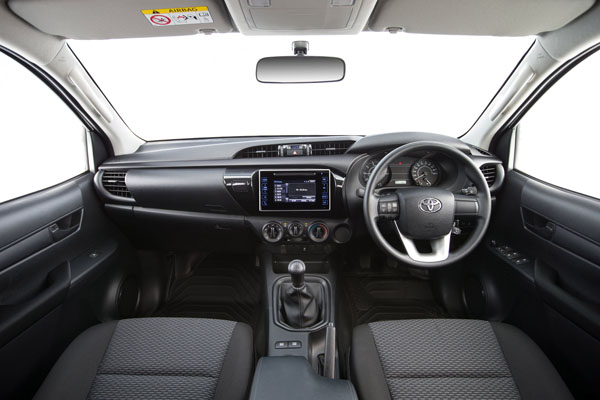 SAFETY
With the maximum five-star ANCAP safety rating across the Hilux range, plus a reversing camera on all pick-ups and as an optional accessory on cab-chassis models, seven airbags include driver’s knee protection.

Topping off the package are a pre-collision safety system warning against a front-on crash and includes smart pedestrian and daytime cyclist detection. It also recognises certain speed limit signs, flashing them up on the touch screen.

DRIVING
Getting into the front of the HiLux gives real meaning to the word clamber. It’s a real climb, even with the help of well positioned grab handles. Settling into the leather-like wrapped seats there’s a welcome familiarity with the instruments and layout of controls.

Rear seating is more unsettling, with a similar ascent to the front, space for three average-size bodies along the back, but there’s a premium on leg and headroom for anybody bigger.

Of course, being a ute, the cabin doubles as the boot for storage unless the cargo is weatherproof and not too bulky to fit in the tub. An optional soft or hard tonneau cover would be a wise investment, as would a rubber mat to stop loads from sliding or scratching the tray paint. Loading height can be challenging with heavy stuff.

The HiLux pulls away with ease, the motor quietly going about business across the whole rev range. Steering is light(ish) and responsive but the ride can be far from smooth on uneven bitumen, especially when there’s nothing in the tub.

Payload is 955 kg, braked towing capacity 3200 kg. At more than five metres long, reversing into parking places, the bane of ute owners, has been relieved by parking sensors and a rear-view camera with guidelines projecting surroundings via the expansive touch-screen on the centre dash.

SUMMING UP
With its leather-like upholstery, rubber mats and torquey diesel power the Toyota HiLux SR5 spans the whole truck spectrum: from smooth, sophisticated sports utility vehicle to willing workhorse. It’s as simple as that.