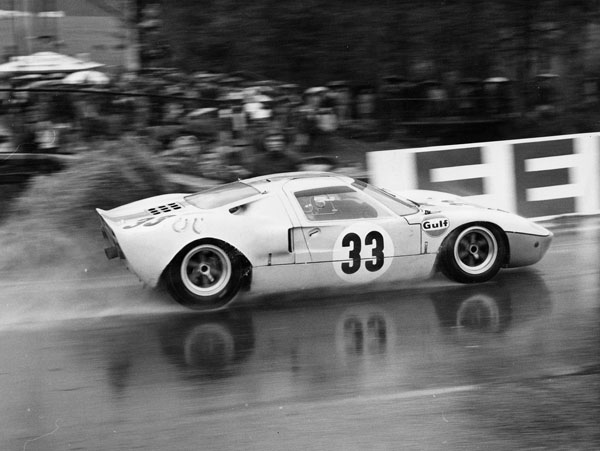 To start the project off Broadley wanted a lightweight monocoque construction, while Lunn – ever mindful of the way things were done in Detroit – demanded a hefty steel structure. Finally, Broadley eased himself out to go his own way with the instantly successful Lola T70 sports racer, leaving Lunn to wrestle with a heavyweight flop called the Ford GT40 because it was only 1016 mm high. But it looked sensational and the publicity men back in Detroit hailed it as a world-beater before it had even been road tested. This made the shock even greater when all three GT40s failed to finish at Le Mans in 1964, soundly beaten by Ferraris.

Although enraged by their failure at Le Mans, the Americans were learning fast and redesigned the Mark II into a far lighter and more sophisticated J-car. Unfortunately, not all the lessons had been learned and it still had a homely two-speed automatic transmission and did not run well in testing. So, eight 7.0-litre Mark IIs and five 4.7-litre GT40s lined up with three front-line Ferraris at Le Mans in 1966. Three Mark IIs survived the hard-fought contest for Henry Ford to flag them in 1-2-3 on ‘the best day of his life’.