The next generation Ford Focus won’t be on sale in Australia until November; but in the overheated Australian sales market it made sense for Ford Australia to release details early.

The Ford Focus is made in Germany and will come here with a choice of three model grades at launch: Trend, ST-Line and Titanium. Body types are five-door hatch and station wagon.

At launch, the all-new Focus will be powered only by a new-design 1.5-litre EcoBoost three-cylinder engine producing 134kW and 240Nm. It will be mated to an all-new eight-speed automatic with paddle shifters.

All models have alloy wheels: 16-inch on the Trend, 17s on the ST-Line and 18-inch on Titanium.

The Focus ST-Line replaces the existing Focus Sport and has a honeycomb grille, sporty side skirts and rear bumper capped with a chrome-finished twin tail-pipe. The hatch has an integrated boot-lid spoiler.

The ST-Line has sports suspension, a flat-bottom sports steering wheel with red-stitching, metallic pedals, wireless smartphone charging as standard. Its dual-zone climate control can be operated via voice activation. 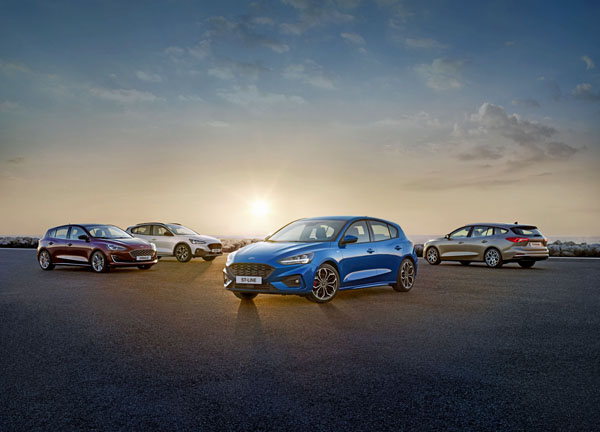 Ford Focus Titanium has leather upholstery and an LED Lighting Package that provides a broader headlight spread as well as automatic high-low beam. Camera-based dynamic bending enables the swivel of the light beam into the curve before the vehicle reaches it.

Titanium also features Stop&Go Adaptive Cruise Control (ACC) with Evasive Steer Assist and Lane-Centering as standard. The ACC system helps the Focus maintain a comfortable driving distance from vehicles ahead, and with the addition of Stop&Go, has the ability to bring the vehicle to a complete stop.

Post-Impact Braking (PIB), automatically apply the brakes after a collision to reduce the risk of rolling onto another vehicle, preventing a second collision.

Ford Focus will have a five-year, unlimited kilometre warranty.

Full pricing and for the all-new Ford Focus will be announced ahead of its 2018 Australian launch. We will bring this information to you as soon as we receive it.

Other models and engines will be introduced later and we will report on them when announced.