ON THE FACE OF IT, NOT A CIVIC AS WE KNOW IT

Whoa! What’s this? Anybody could be forgiven for that reaction on first sighting the new Honda Civic hatch, for what was once a compact, economical city runabout has morphed into a savage looking coupe-like car keen to devour the kilometres and anything in its way.

First seeing the light of day in Australia in 1973, with its challenging face, swept-back profile and equally bold rear styling, the tenth generation hatchback is like nothing that has come before, or is in the highly competitive small-car segment now.

The hatch slots in the Civic range between the recently-released sedan and the soon-to-be selling R-Type hot hatch, which has just set a record lap time for front-wheel drive cars on the Nurburgring Nordschleife.

With five grades, the hatch line-up runs parallel to the Civic sedan, with VTi, VTi-S, VTi-L, RS and the range-topping VTi-LX. However, there are a number of features that set the two models apart, not to mention the body style of each line.

Manufacturer’s list prices follow suit, with the exception of the sporty RS, which picks up exclusive equipment and a $500 price premium over the corresponding sedan. 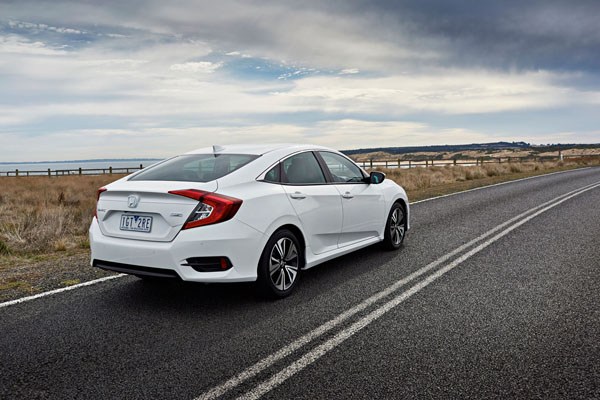 All models feature LED daytime running lights in a hockey-stick shaped strip at the outer edge of the cluster.

There’s nothing technically treacherous for the driver inside the passenger cabin. In fact compared to the flashy full-on exterior, it’s mum-and-dad design for instruments and controls.

Instrumentation is dominated by a large tachometer positioned directly in front of the driver and flanked by a temperature and fuel gauge. A digital speedo can be found in the centre of the tachometer.

The driver-oriented dashboard is designed for clarity and to rigorous ergonomic standards and with a nod to the ubiquity of smartphones in people’s lives, the spacious console is crafted around a ‘tech centre’ theme to open up connectivity.

Up front, it has a two-tier smartphone tray with a clever wire management opening.

A space-saving electronic parking brake takes the place of the traditional parking brake lever, freeing up more console space for storage and to accommodate a larger armrest.
A pair of cup holders is centrally located and can accommodate large cups when the padded centre armrest is placed in the rearmost position. The cup holders can also be removed, leaving up to 7.2 litres of storage, enough to take iPads and other large items.

A first for the Civic Hatch is a retractable side-mounted cloth luggage cover, which can be pulled out from a side-mounted cassette. For tall objects, the cover can be freed to retract back into the cassette. It takes the place of a parcel shelf and can be removed altogether.

While Honda Magic Seats are absent from the new Civic Hatch, the second row of seats folds flat, opening up the boot space for larger, awkward-to-handle cargo. 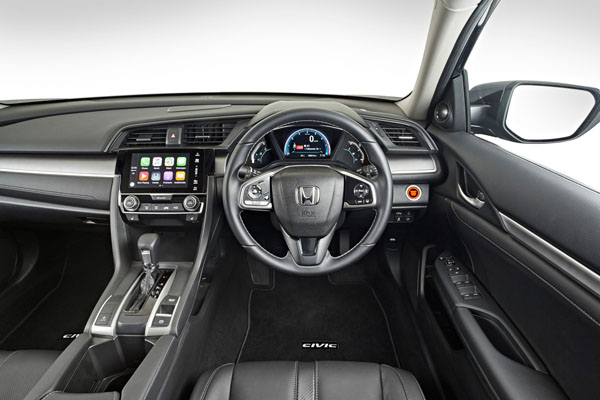 A 7.0-inch Advanced Display Audio touchscreen at eye level uses the Android operating system to offer a wide range of uses, allowing users to swipe, tap and pinch – just like on a tablet or smartphone – to control the vehicle’s audio system, display settings and other advanced features.

The standard 180-Watt audio system has eight speakers, while the RS and VTi-LX feature a 542-watt premium audio with 12 speakers, including two satellite speakers, centre speaker and sub-woofer. Digital radio is available on VTi-L, RS and VTi-LX models.

Owners can call on apps from their Smartphone through either Android Auto or Apple CarPlay for navigation, phone, messaging and music and entertainment. Civic owners can also use the car’s Wi-Fi hotspot when tethered to a mobile phone with data plan.

Remote keyless entry is standard equipment on VTi, while Smart Entry is available on all variants from VTi-S up and allows the driver to approach and open the car front doors and use the boot without using a key or pressing a button on the remote. With the remote in their possession, the driver simply presses the release button and opens the boot.
The system will not allow the transmitter fob to be locked in the car but will, on the Civic VTi-S and above, automatically lock the doors once the driver has walked 2.5 metres from the car with the key.

The VT-i and VTi-S Hondas use the proven 1.8-litre engine turning out 104 kW and 174 Nm. Both are mated with a new design of continuously variable transmission.

The hatch’s rigid body frame has lost 16 kg in weight over the previous model yet delivers a 52 per cent improvement in torsional rigidity. The tough passenger cell and rear crumple zone ensure passenger safety in a rear-end collision.

The fully independent suspension includes an all-new multi-link rear design that is rigidly mounted to the sub-frame for a high degree of lateral stability. All front suspension arms and the front hub carriers are steel and all variants of Civic sedans and hatches carry a tubular front stabiliser bar.

According to chief engineer Akihito Funakoshi, while ostensibly a Japanese designed and developed vehicle, Honda looked to the European hatch as the benchmark and had worldwide input from Honda arms in all facets of progress.
The aim was to turn out a hatchback capable of agile handling, quick cornering, with low noise, vibration and harshness and outstanding fuel economy.

As well as standard anti-lock brakes with electronic brake-force distribution, vehicle stability assist with traction control and agile handling assist on offer on the range-topping VTi-LX for the first time on a Civic Hatch is the Honda Sensing suite of safety and driver-assist technology.

Does the new bold styling stack up with performance? Yes and no. On a launch drive program in the Barossa Valley of South Australia, the Civic Hatch RS and VTi-S showed themselves to be quite different propositions in this respect.
The RS, with its 1.5-litre Turbo engine, took to the city street stop / start with a noisy engine note, while country roads were tackled with enthusiasm, if a little harshly on uneven surfaces, something that could become tiring on a lengthy run.

The Honda Civic VTi-S, with its bigger 1.8-litre naturally aspirated motor, coupled with a new Earth Dreams CVT, was a different matter, delivering a smoother, if not as responsive ride, than its turbocharged little brother. It was altogether a more relaxed experience. So, it seems, the new Honda Civic Hatch range has something for everybody.