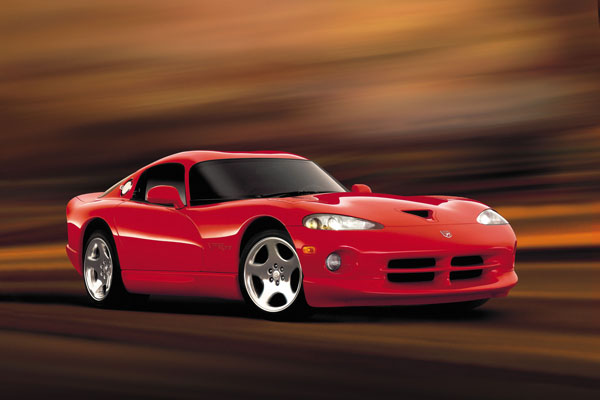 First shown at the 1989 Detroit Motor Show as a concept car the Dodge Viper was a real crowd pleaser. The fact that Carroll Shelby, the legendary creator of the Cobra had acted as a consultant to Chrysler in the car’s design greatly assisted in boosting its image.

Chrysler was so pleased with the public reaction that they immediately set about forming a design team to rush the car into production. Thirty months later the Viper started to appear in Chrysler showrooms across the USA.

By the use of a plastic body the designers were able to introduce a series of curves throughout the body which gave it a suggestion of ducted power. There was no roof initially, other than a tent like piece of vinyl but side curtains were fitted. In case owners got caught out in the rain, the interior was trimmed in waterproof materials. Later a `double bubble’ hardtop was developed.

With its 8.0-litre V10 engine the Dodge Viper was a monster performer. It certainly needed its three-spoke 33cm wide rear wheels to cope with its 300kW output. Surprisingly though the engine was truck derived even though Lamborghini had been engaged to help in the modification.

Some of the changes made to the original engine comprised switching the cast iron block to all aluminium as well as giving it a bright red head! But basically, it remained rather low-tech with only two valves per cylinder, hydraulic lifters and long push rods. It also retained the truck like torque curve peaking at 610Nm. Acceleration was one of its strong points as it could dash from 0 to 96km/h in only 4.5 seconds by using the six speed transmission which it was fitted with. The Viper was capable of a top speed of 290km/h.

The Dodge Viper’s curvaceous design, massive wheels and side-exit exhausts were all throwbacks to the muscle car era of the late 60s, but this time the price was within the reach of many more motorists, especially those who were looking for a fair weather fun car.