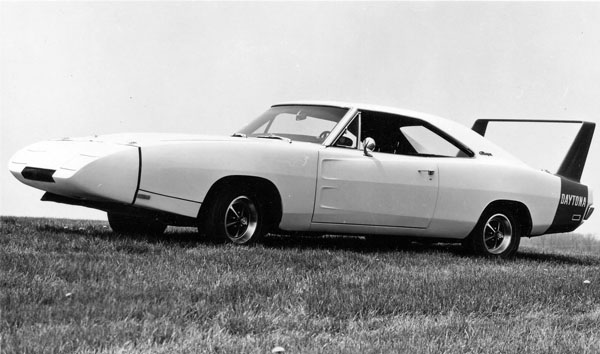 In 1968 Dodge introduced a new car, aimed at recapturing former glories at Daytona. It
was built around the 6980cc 90-degree V8 hemi engine of the Charger and although the
power output had to stay the same to comply with the rules there was some advantage to
be gained from changing the bodywork.

This was the time when automobile aerodynamics were first in vogue. For Dodge this
meant a new plastic nosecone designed to conceal pop-up headlights and at the rear a
really large spoiler. The spoiler was so large you could not miss it no matter from which
angle you viewed the car.

These aerodynamic design elements improved airflow over the car by some 20 per cent.
The practical advantage of this was a higher top speed and the extra km/h meant that the
new aerodynamic car gained 450 metres for each lap covered over the previous car in
NASCAR events.

The Daytona Charger had a four-seat sports car body with independent front suspension
by coil springs and wishbones and semi-elliptic leaf springs at the rear. It was capable of a
top speed approaching 320km/h.

The fabled 317 kW hemi engine played a major part in Dodge performance. It was dubbed
the Orange Monster and used by both Dodge and Plymouth whose development ran more
or less along parallel lines, especially when it came to the low volume specialist cars. With
this engine they both achieved a long list of victories in drag racing and NASCAR events
during the early 1960s, hence the reason it was selected for the Daytona Charger.

Only 505 cars were built, just five more than were needed for homologation.