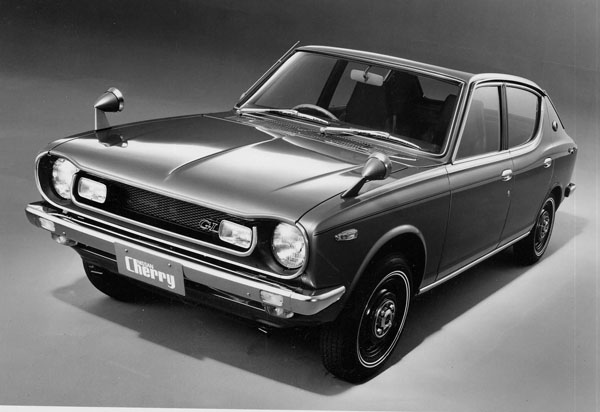 Not long after releasing the Datsun 240Z sports car, the Japanese Datsun company was busy designing a supermini; the 100A Cherry. This car was announced about the same time as Fiat released its 127 and as it turned out the specifications were very similar.

History shows that Fiat is generally given credit for starting the supermini trend, the Datsun Cherry provided strong evidence of the correctness of the theme. In fact, the Nissan design team got the design right first time.

Their designer’s brief specified space and performance parameters from which the Nissan design team soon realised that by following the lead set by the Morris Mini in using a transverse engine and front-wheel drive, could not only be met but also would produce a car that was lighter and smaller, and therefore cheaper and more economical.

In their home country the Cherry was not a spectacular sales success, but elsewhere and, especially in Europe, it was another matter.

The Cherry was powered by a well-tried engine with pushrod-operated overhead valves developing 44 kW. The transmission was arranged in a similar way to the Morris Mini, with the four-speed manual gearbox in the engine sump, the differential immediately behind and equal-length drive shafts. When designing the suspension the Nissan engineers hedged their bets somewhat by using MacPherson struts at the front in the same way as Fiat but employed trailing arms at the rear as used in the Mini.

Rack and pinion steering was adopted, unusual for Japanese cars at that time. The two door saloon body on the Cherry was exactly the same length as the Fiat 127 at 2.34 metres and just 50 mm narrower. It weighed in at 68 kg less than the Fiat and only 23 kg more than the Mini. Another compromise was the wheel size selection. The 12-inch Cherry wheels were smaller than the Fiat’s, but bigger than those on the Mini. As radial-ply tyres hadn’t reached Japan at this stage cross-ply tyres were standard. Cherry had a maximum speed of 140km/h.

As is common in the automotive industry, the Datsun Cherry was steadily developed and, in the process, became bigger and heavier as well as more technically advanced. In the process an overhead camshaft engine was eventually adopted and the original flawed transmission-in-the-sump arrangement was replaced by the one pioneered by Fiat.