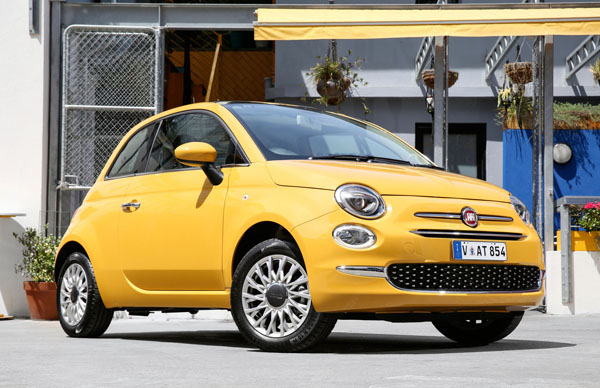 It’s hard to believe the new Fiat 500 is approaching its tenth year. The little Italian classic has been a huge success in Europe, though a slow starter in Australia it has taken off in the last few years and is now a common sight on big-city streets downunder.

Unlike its two big rivals, the BMW Mini and VW Beetle which have been fitted with completely new bodies, albeit following the original theme, the Fiat 500 still has its original shape introduced in 2007. It has just been facelifted, as well as given out-of-sight technical advances.

The bonnet is a carryover unit but the styling of the headlights is new, as are the daytime running lights (DRLs). The front is closer to vertical than before, which gives the 500‘s a slightly bolder look. The most noticeable design change is to the lowset grille which now has a diamond shaped theme similar to that of the new 500X crossover. At the rear the taillights are the same shape as before, but now have a funkier design courtesy of the guys and gals at Fiat’s Centro Stile.

The biggest changes are in the 500‘s cabin. It still has the painted metal look on the dashboard that everyone loves. As introduced in the previous makeover the readouts in the upmarket 500 Lounge are electronic, those in the lower cost Pop remain conventional.

A central infotainment screen tends to dominate the centre of the dash area. To our eyes this takes away from the simple purity of the original design, but we are well aware buyers want to stay in touch with what’s happening in the outside world. So the 500 now gets the Fiat-Chrysler Uconnect system and USB, Aux and Bluetooth connections on all models.

The central console has the same switch arrangement as previously, but the switches themselves have been redesigned as part of the upgrade.

Seat and trim designs have been given a work over, both visually, and in the out of sight areas to increase comfort by revising seat padding.

On the road there’s no doubt you’re at the wheel of a European car; no, not just European, an Italian machine. The baby Fiat is lively in its handling and just loves to tackle bend after bend at the sort of speeds keen drivers crave. It’s surprisingly well balanced for a front driver and the harder you go the more the steering and suspension ‘talk’ to you. Love it! 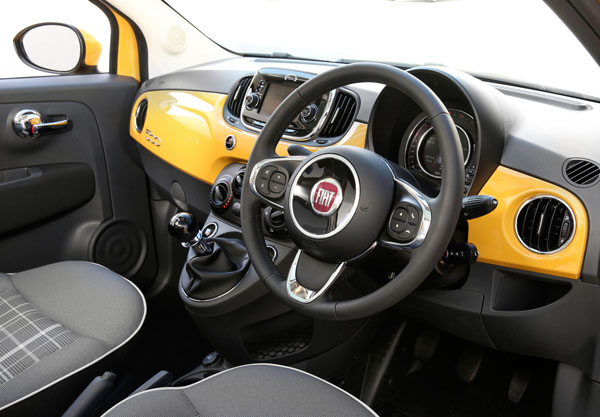 Ride comfort is noticeably better than the superseded model, we know because we have a Fiat 500 by Gucci in our family and it can be on the bumpy side at times when on roads that have seen better days. Road noise is also lower.

During the media launch of the facelifted Fiat we sampled a 500 Pop cabriolet with a 1.2-litre engine (51 kW and 102 Nm) and a five-speed manual gearbox as well as a Pop hardtop with an automated manual gearbox. This self shifting manual, DuaLogic in Fiat speak, can be irritating at times in its lower gears, but in this latest model feels to be better than in previous iterations, possibly because the computer has been smartened up. Nevertheless, it would be nice to the see a double-clutch auto as fitted in big brother 500X installed in the standard 500

We also drove a Fiat 500 Lounge with a 1.4-litre powerplant (74 kW / 131 Nm) and a six-speed manual. This is certainly our powertrain of choice as the extra grunt and closer-spaced DIY gear ratios are a neat combination.

If the nippy little Fiat doesn’t help the driver from staying out of trouble they will be pleased to have ABS with electronic brake distribution (EBD), advanced electronic stability control, anti-slip regulation (ASR), Hill Holder and hydraulic brake assistance (HBA) to try and save them.

Should all else fail, a well engineered body and seven airbags will minimise the impact on the occupants.

Colour and customisation are big features in building a Fiat 500 to suit individual tastes. There are no fewer than 13 paint colours, three roof colours on the cabriolet and 10 interior themes. Then there are various decals to really get your imagination into top gear and go all the way with customisation. Click onto the Fiat Australia website, or better still take a drive down your dealer to see what’s on offer.