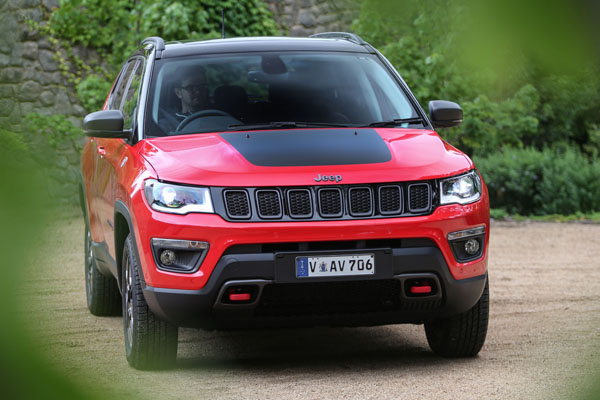 Having not ridden the Rubicon Trail, I could be wrong, but I would be loath to tackle the
rock-strewn passage in the Sierra Nevada, rated a ten in difficulty, in the Jeep Compass
Trailhawk, which the maker says has tamed the track and earned its Trail Rated tag.

This small-to-medium sport utility vehicle, the flagship of the Compass range, which was
tweaked last year, is a solitary ‘bird’, being one of the few diesel-powered compact SUVs
around.

One of four Compass models (three petrol powered) that come to market starting at
$39,950, plus on-road costs, the diesel Trailhawk sells for $52,650. Premium paint adds
$645, while a Premium Package, including twin-pane panoramic sunroof, ventilated and
heated front seats, heated steering wheel and Alpine nine-speaker Premium Audio adds a
further $3950 to the price, putting the vehicle close to prestige car territory.

STYLING
Subject heavily to the designer’s pen, the Jeep Compass has been refreshed across the
range. In keeping with its Trail Rated off-road performance the Trailhawk has taken on a
unique grille treatment, coloured foglamp bezels, prominent skid plate and stand-alone 17-
inch alloy wheels.

Functionality comes to the fore with bumpers, foglamps, and camera radar housed in a
higher position for greater protection off road. This is further enhanced by full LED daytime
running lights, high and low beam, plus fog lamps, having doubled in brightness over the
old Xenon headlamps. 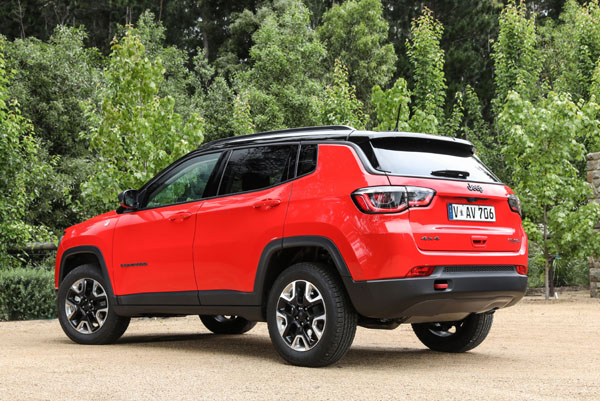 The rear has followed suit by being given a more modern, bolder look via its sleek
taillights.

INTERIOR
For many years Jeeps were not known for stylish refinements and easily accessible
control systems. The Compass sets the new standard in this field with a more functional
use of space and convenience.

A higher central tunnel offers almost five litres of storage under the armrest and an
additional 2.4-litre compartment, next to the new gear lever, with space to take a mini-
tablet.

Convenience extends to the rear, with a new automatic tailgate operated by means of a
kicking motion under the bumper providing access to the cargo area. Rubber mats front
and centre, plus a rubber / material a double-sided mat in the luggage area stand owners
in good stead for carting all the kit needed when making the best of the great outdoors.

INFOTAINMENT
The Compass debuts the latest generation Jeep Uconnect with its 10.1-inch-high-definition
touchscreen with TomTom navigation incorporated. Upgrades include voice recognition,
woken by the phrase ‘Hey Jeep’, to control settings and program the air-conditioning and
change radio via voice commands.

Wireless smartphone charging is available across the Compass range via a pad in front of
the gearshift. 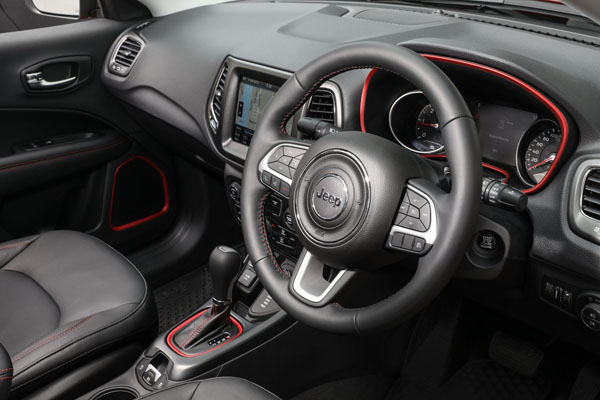 ENGINES / TRANSMISSIONS
The Compass Trailhawk is powered by a 2.0-litre four-cylinder turbo-diesel engine
producing 125 kW and 350 Nm and paired with a nine-speed automatic transmission and
four-wheel drive.

DRIVING
Keyless entry was debatable, failing to respond to the key fob button on several
occasions. The mystery was solved when a message on the instrument screen announced
the key fob battery was low. Totally out of order on such a new vehicle.

The Trailhawk was slow to respond to the gas pedal and once or twice on an incline, even
with foot flat to the boards, the transmission was reluctant to change up and move on
smoothly.

Jeep rates the fuel consumption at 6.9 litres per 100 kilometres on the combined urban /
highway cycle. On test it was more like 8.3 litres per 100km on a combination of city and
country driving.

As for lane keeping assist, Active Lane Manager in Jeep speak, was heavy handed and
rived the steering wheel, causing the Compass to come to heel at the slightest shift from
lane centre. Opt out, and the system can be disengaged.

Flat firm seats would be far from welcoming on an extended run. But parking manoeuvres
are kept well in the picture with the car’s 360-degree camera views.

SUMMARY
The Compass Trailhawk would pass for a good-looking boulevard cruising SUV, or on
unsealed dirt or in snow, but I retain some doubts, due to its lack of muscle, as to its
handling of serious off-road obstacles such as boulders or logs.