CITROEN C4 TAKES THE HARD ROAD TO COMFORT AND ECONOMY 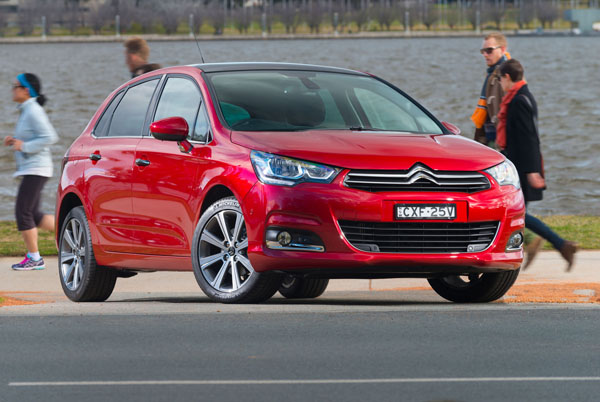 Ninety years ago, in 1925, a Citroen 5CV became the first vehicle to complete a full circuit of Australia. Almost a century later, Citroens are still going round: an upgrade of the Citroen C4 hatch is one of the French maker’s latest models to land in Australia.

Styling also comes in for a makeover, with two variants – Seduction and Exclusive – looking good from every angle.

There’s no cheap version. Both slot in at the upper end of the segment price range, the Seduction coming in at $29,990, plus on-road costs, the Exclusive at $33,990. The test car turned out to be the fully-specced Exclusive model – hardly a surprise. 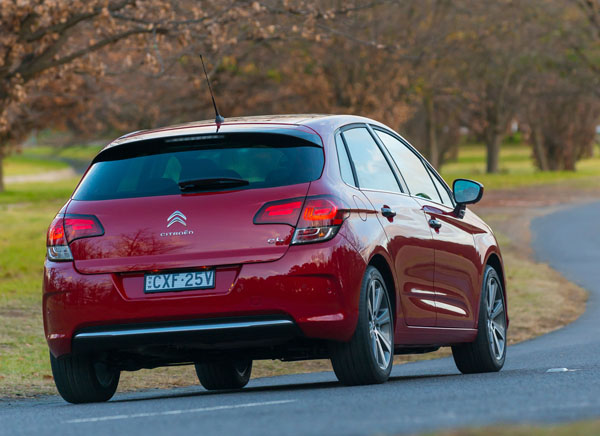 INTERIOR
The cabin has a premium feel with soft touch dashboard, quality cloth roof lining and touches of chrome on the steering wheel controls, air vents and gear lever. Exclusive receives a part-leather, cloth and alcantara trim as standard.

Generous storage includes a large glove box, door panels in front large enough for a 1.5-litre bottle, drawers under the front seats, storage space on the dashboard and under the front armrest. 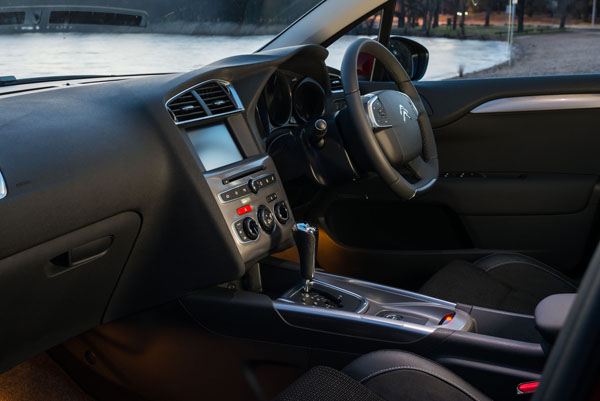 INFOTAINMENT
Focus of the cabin interior is an all-new 7.0-inch tablet-style touch screen that gets rid of 13 buttons from the dash panel, resulting in a cleaner, more intuitive set-up. The new touchscreen has allowed the take-up of satellite navigation as standard on both models.

ENGINES / TRANSMISSIONS
The all-new PureTech drivetrain has provided a weight saving of 125 kg over the discontinued Euro 5 diesel model. Based on the three-cylinder naturally aspirated engines in the PureTech family, the turbocharged version in the C4 hatch operates smoothly and without the raspy sound of other compact units.

Compared to the previous 1.6-litre, four-cylinder, four-speed automatic petrol drivetrain, the new C4 develops 8 kW more power and 70 Nm extra torque. While performance is up across all measures compared to the outgoing petrol model, fuel use and emissions are down – with an improvement of 2.1 litres in fuel use over 100 kilometres (down to 4.9L / 100km) and a reduction in carbon dioxide emissions of 39 grams per kilometre.

The PureTech 130 drivetrain is mated with a six-speed automatic gearbox developed in conjunction with Aisin. Compared with the previous four-speed transmission gear shifts are 40 per cent faster thanks to Quick Shift, a new technology for synchronised control of engine and gearbox, and a new and more efficient calculator.

SAFETY
Intelligent Traction Control provides a better grip on slippery surfaces such as snow, ice and mud, detecting conditions that make it difficult to move off. In these situations, the ITC replaces the anti-slip regulation and transfers the drive force to the wheel with the best grip.

There’s also Hill Start Assist and an electric parking brake that automatically holds the vehicle steady for two seconds to allow an easy start on gradients of over 3 per cent.

Front foglamps with static cornering lighting shine an additional beam on the inside of corners, thus improving visibility. They are turned on in two ways: when the turn signal is activated or when the angle of the turning wheel reaches 60 degrees, lighting an angle of up to 75 degrees on either side of the vehicle.

The ultrasonic Blind Spot Monitoring System fitted to Exclusive models warns the driver who hasn’t adjusted the mirrors correctly that a vehicle is in a blind spot they have created. It has orange diode in the corner of the rear view mirror.

DRIVING
All Citroen C4 hatch variants benefit from a responsive steering system. A 105 kg mass reduction over the front of the vehicle has resulted in spring and damper rates being revised to allow for increased comfort, while also benefiting turn-in.

Eco mode, connected via a dash-mounted switch, automatically cuts the engine when the car comes to a standstill. The air-con likewise shuts down and is left to pumping out warm air into the cabin, even hot stuff in summer. The fuel savings are not worth the inconvenience. I reached for the ‘off’ switch. Better systems realise the interior is warming up and restart the engine – come on Citroen…

As it was, the test C4 hatch recorded fuel consumption of a frugal 4.5 litres per 100 kilometres on the motorway and nine litres around town with the Eco mode off.

Test car brakes were a tad sharp and practice was required to achieve smooth operation. Loss of concentration had the C4 lurching.

In a small car, the size-to-space ratio is all important. Citroen C4’s dimensions are unchanged, with a length of 4.33 metres, width of 1.79 metres, and height of 1.49 metres, but with a 2.61-metre wheelbase rear seat room is generous.

Boot volume of 408 litres is all useable, with a low load entry and interior fittings, while 60 /40 split fold seats and a ski flap allow long, cumbersome objects to be carried.

Flat, yet comfortable, seats, large windows, panoramic glazed roof (Exclusive only) measuring 1.3 square metres is let down by a blind. Okay, it’s lighter than a metal roof panel, but while it keeps out the sunlight, it doesn’t act on the same level, letting in more heat.

SUMMING UP
It’s all right moving to the middle of the road but the Citroen C4 hatch will come into contact with some stiff opposition from the likes of Toyota, Mazda, Kia, Hyundai and a host of other Europeans that produce cute and cheap compacts like shelling peas. Bon chance!