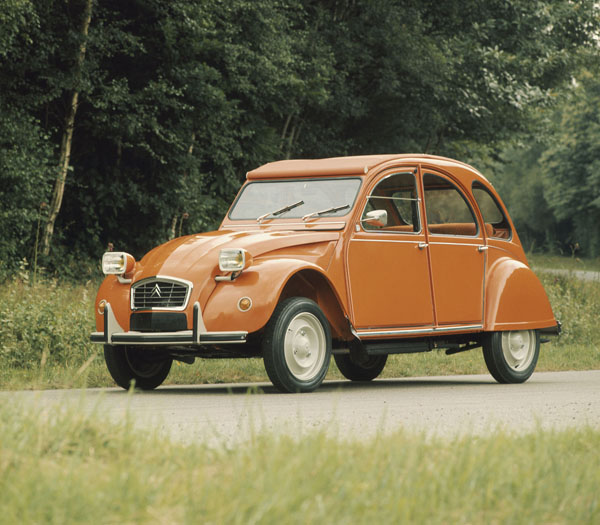 Just as the original VW beetle was designed as the people’s car for Germany, the Citroen 2CV was truly the French people’s car. Although a true ugly duckling it was at the same time extremely practical and ideal for its purpose.

The car was conceived back in the mid 1930s, well before World War II and the development team was given a rather strange set of specifications on which they had to base their design. These included such requirements as being able to be driven across a ploughed field, carry a case of eggs without breaking any and even to allow the driver to wear a hat whilst driving.

Performance requirements were not spectacular. This was not to be a racing car but a beast of burden – a suitable replacement for the horse and cart, the then most common form of transport in rural France.

The 2CV engine was an air-cooled OHV two-cylinder midget of 375 cc driving the front wheels. In its earliest form the starting mechanism comprised a rope pull similar to that used in the Victa lawnmower, but as development proceeded a crank-handle was added to assist lady owners. An electric starter was added much later.

Fuel economy was excellent at 5.6 litres per 100km. The suspension was simple yet ingenious being in the form of torsion bars designed to allow long travel over rough roads with safe handling on smooth roads. Passenger comfort was also aided by the use of seats comprising rubber bands stretched on the tubular frame. These seats could also be readily removed to increase the load-carrying capability of the car.

The body was indeed simple. It comprised corrugated panels and a push-back cloth roof. The intention was to launch the car at the Paris Motor Show in 1939, but the war intervened and the show was never held. Prototypes were hidden and engineers worked on the car in secret recognising that such a car would be ideal in a post-war market due to its economy and simplicity.

The car finally went into production in 1948 and by this time it had an air-cooled engine to reduce maintenance and repair costs. The body design was somewhat improved whilst still maintaining its simplicity; the fixed side windows now had flaps for ventilation and hand signals, and two headlights were fitted in place of the single one used on the prototype.

Surprisingly this car remained in the Citroen range until 1990 with gradual improvements over time. For the first six years of its life it only came in a grey matte colour, but from then on the car gained not only brighter colours but also more power. The target market also changed from French peasant farmers to trendy Parisians and today the 2CV is still seen as an urban cult car in many cities of the world.