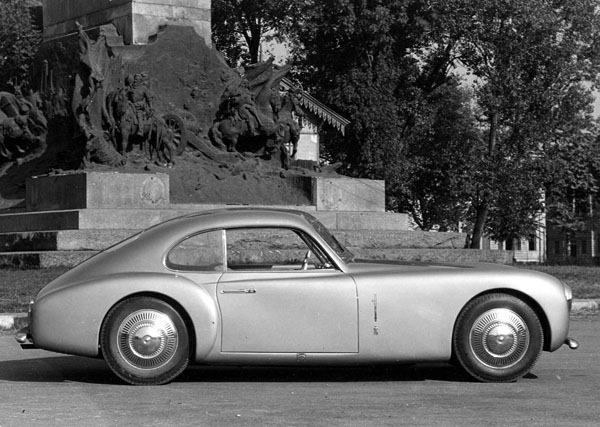 To aid post-World War II recovery of the motor car industry in general and the motor racing
business in particular Piero Dusio, an Italian businessman, established a small firm in
Turin to concentrate on car racing and body design. As production of the Fiat 1100 had
been restarted and stock was becoming readily-available he chose the Fiat 1100 engine,
modified to yield 37kW or 45kW as the basis of his design, fitting them to a single seater
sports car using a tubular space frame and suspension of advanced design.

For a brief period, these cars formed a special competition class. One driven by Tazio
Nuvolari finished second overall in the 1947 Mille Miglia while Piero Taruffi won the 1947
Italian Championship with a Cisitalia. The name of this marque stands for Compagnia
Industriale Sportiva Italia.

In the late 1940s, Carlo Abarth, Ferdinand Porsche, and others designed for Cisitalia a
complex front-wheel-drive racing machine, with a supercharged flat twelve-cylinder engine
said to develop 224kW from 1,500cc. But Dusio ran out of money and the car never had a
chance to prove itself.

Spurred on by their racing success Dusio envisaged producing a sports coup‚ and began
to develop the specifications for such a car. He gave his engineers details of the design he
wanted, which included some of the features of the original D46. It was to have the Fiat
1100 engine tuned to produce 41kW in standard road form with a maximum speed of
160km/h and was to be known as the 202GT. He sought body design concepts from
Touring, Vignale and the two Farina brothers. In the end he chose the design proposed by
Battista Pinin Farina. Battista Farina was known to everybody as Pinin, leading him to
eventually change his family name to Pininfarina, and it is by this name that many cars
today bear the design citation Body by Pininfarina.

Although this was only one of many designs to come from the pen of Battista Farina it was
considered such a masterpiece that, since production in 1948, the car has been exhibited
in the Museum of Modern Art in New York. It is the only car to have been so honoured.

Cisitalia road cars pioneered the subtly styled and functional Farina line. These bodies had
straight or nearly straight sides and highly integrated quarter panels that superseded
wings with a nearly flat bonnet nesting in a valley between the two front panels. In 1952
the 1100s were joined by a Farina-bodied three-seater coupe‚ and a two-seater
convertible powered by a 2.8-litre marine engine. Few of these expensive models were
sold and production ceased in 1958.

The last Cisitalias, from the years 1961-65, were modified Fiat 600s that could not
compete against Abarth and other specialist firms.