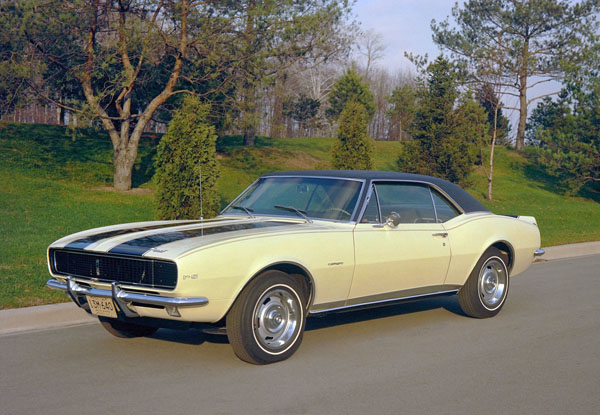 General Motors often claim to be the first manufacturer of true post-war sports cars in the
United States with the Corvette. Certainly, it was the first built in any volume but the
newness of the concept to American car buyers took a while to catch on. Even though
European sports cars were popular sellers at the time, the Corvette, when first released,
was a flop.

Despite this Ford followed quickly with its Thunderbird and using superior marketing skills,
quickly outsold the Corvette two-to-one. Ford’s action took the industry by surprise and
clearly showed that the youth market was certainly performance-oriented. To capitalise on
this Ford launched the Mustang two seasons before other manufacturers were able to
catch up.

General Motors response came from Chevrolet in a car called the Camaro, which was first
released as a 1968 model. Camaro copied the classic marketing strategies developed for
the Mustang. It had a long option list, which included no less than 81 factory-fitted choices,
together with an additional 41 accessories which the dealer could install.

The concept allowed each buyer to tailor a car to their own individual specification, a
feature which Americans obviously liked as cars sold in increasingly larger numbers and
only months after the Camaro was released it came with more specifications than any
other car in production at the time.

The Camaro was powered by a base straight six-cylinder engine developing 104 kW and,
as an option, a more powerful 116 kW version was offered, as well as two V8 engines.
These were the superb 5.2-litre and, what was inclusive to Camaro in its launch year, the
new 5.6-litre small block engine which ultimately became the standard GM V8 power plant
for many years after.

There was also another V8 option which was not heavily promoted, the Z-28. This was a
race-tuned engine designed for the Trans Am series of Chev racing cars.

This new 4948 cc engine enabled the Camaro to just fit into Group 2 of the Trans Am
series and, as the FIA rules required a minimum of 1000 cars to have been produced, the
4948 cc engine formed the basis of the Z28 option which could be ordered through any
Chev dealer. The Z-28 was the most performance-oriented Camaro ever.