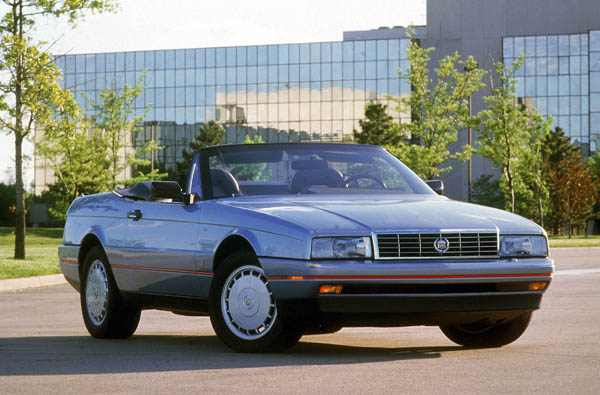 In the mid-1980s European sporting luxury cars produced by makers such as Mercedes-Benz and Jaguar gained increasing prestige on the American market, much to the chagrin of General Motors. Around the same time GM corporate structure underwent change which meant that Cadillac became responsible for its own engineering and manufacturing. It was the only GM Division to be granted these responsibilities.

Being allowed the flexibility of choosing from where they obtained their engineering elements Cadillac management, late in 1986, wasted no time in answering the challenge from Europe in planning the Allante. It was a classic example of a luxury sedan manufacturer’s idea of a sports car!

Allante was to be an open two-seater convertible with a soft top and sporty Italian styling and was built on a shortened version of Cadillac’s Eldorado platform chassis, as also used on the Buick Riviera and Oldsmobile Tornado. Pininfarina of Italy designed and built the Allante’s body.

Each chassis was sent all the way from the USA to Turin, Italy where Pininfarina fitted the finished body which was then flown by special aircraft back to Michigan, where the engine, drive train and suspension were installed. This event was described by some motoring journalists as “the world’s longest assembly line”.

The engine was also a modified version of that in the Eldorado. It was a fuel-injected version of the alloy-block 4.1-litre OHV V8, which delivered 127 kW, 30 kW more than the De Ville. Such an engine did not give a performance anything like the European cars it was designed to compete with whose sporty 4.0-litre engines were more likely to produce around 188 kW, but it was probably adequate for a front-wheel drive vehicle. The engine was mounted transversely and drove through a four-speed automatic transmission.

As such the Europeans wouldn’t have considered the Allante a sports car without the classic stick-shift. It boasted a top speed of 192 km/h.

The Allante also had all round disc brakes with the Bosch ABS anti-locking system as standard. It was shod with special wide, low-profile Goodyear tyres. These gave the car a ride quality perhaps more European than American. Inside, special 10-way power Recaro leather seats cradled both driver and passenger.