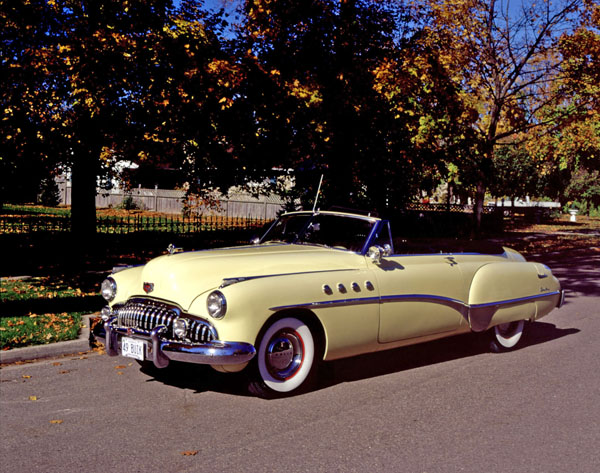 Even though 1957 was the year that Buick celebrated the building of their nine-millionth
car, sales were gradually slipping and the marque could only achieve fourth position in the
industry sales chart. To rectify this situation the Buick division of General Motors expended
considerable funds in improving Buick styling as it was considered ‘old fashioned’ when
buyers compared their offerings with the opposition’s range.

The Buick Roadmaster for 1957 was a large car – 5.46 metres long and 1.83 metres wide.
It was powered by a 5.9-litre V8 engine with a power output of 224 kW. This engine
coupled with a Dynaflow two-speed automatic transmission with its variable pitch blades
gave the car a top speed of 180 km/h and it was able to accelerate from a standing start to
96 km/h in just 10.5 seconds.

Like other American cars of this period, it had large fin-like rear mudguards together with
chrome strips and chrome body mouldings in abundance. At the front and rear huge
chrome bumper bars with large over riders adorned the vehicle. Wrap-around windshields
were standard in this era as were many chrome attachments which served little use other
than appealing to the vanity of the owner.

The Roadmaster was one of Buick’s most luxurious models and in its day the hydraulic
power assisted drum brakes on all four wheels were considered top of the line.
Suspension was by way of coil springs all round.

During the 1950s and ’60s, aircraft design became a major influence on the styling of
automobiles both externally and internally. Many vehicles of this period had interiors and
window styling not unlike that of fighter aircraft cockpits. In this regard the Buick
Roadmaster was no exception. Over 36,000 Roadmasters were built and sold in 1957.