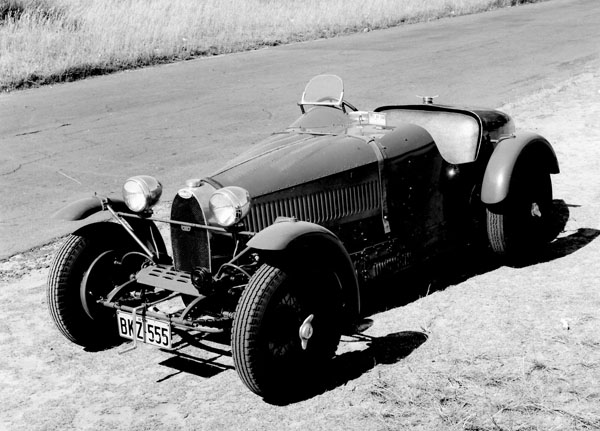 Ettore Bugatti arrived in Alsace in Eastern France from his native Lombardy to design cars for a number of industrial concerns. Right from the start he upset a number of potential customers by his dictatorial attitude towards customers who dared to complain. There was no doubt that he could design great cars but he lost many jobs because of his intolerance of people who did not treat his designs with due respect.

With characteristic extravagance, he had a hotel named L’Hostellerie du pur-Sang built next to his factory in Molsheim. This was intended to accommodate customers awaiting an audience with Bugatti in what was almost a feudal estate but also to emphasise the fine qualities of his machinery.

It was here, in Molsheim, that he produced the type 13, the first series of cars successfully sold by the make. The bodywork for the model was produced by Forler, a well-known craftsman in Strasbourg. Its adaptation as a racing car gave birth to the ‘Brescia’ of which 435 were made between 1910 and 1920 and from which Bugatti’s reputation in car racing terms began. Few car manufacturers had the artistry which French-domiciled Italian, Bugatti had and this was reflected in his designs.

Bugatti was always ahead of many other car makes. His 1914 racing version of the Type 13 used four valves per cylinder and his forged hollow front axle with square holes machined to take the springs on the Type 35 showed extraordinary detail as did the superb fully compensated brakes on all four wheels.

The Type 37 was a sports car adaptation of the very successful Type 35 Grand Prix car. Its engine was a four-cylinder in-line overhead camshaft, developed from the Type 30 by way of the Type 35 but with plain bearings rather than roller-bearings as used in the Grand Prix cars. It also had wire wheels in place of the exotic alloy spokes of the Type 35.

Every detail of a Type 37 was pure sculpture and its purity of line made it one of the most desirable Bugattis especially when fitted with a supercharger as the Type 37A in 1928 for small car racing.