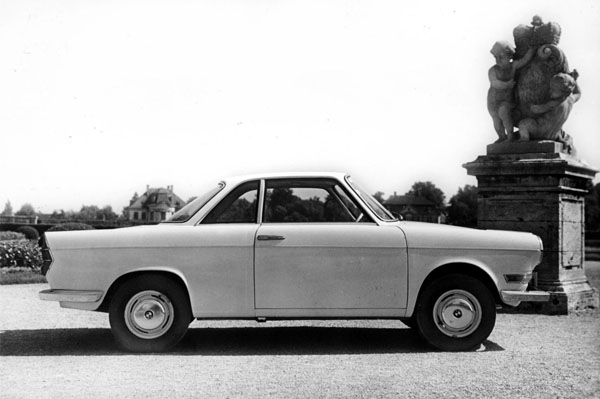 In 1957 BMW introduced the model 600 which was a four-seat alternative to the Isetta, a
mini-car designed around a 247 cc BMW motorcycle engine. The 600 was a move in the
direction of `real cars’ after Europe began to slowly return to normal following World War II
when it became apparent that the market for semi-autos like the Isetta and Goggomobile
was beginning to dry up. The 600 had a two-cylinder motorcycle engine and the first form
of rear suspension with semi-trailing arms that became a normal engineering feature on
BMWs for the years ahead.

The 700 had an air-cooled twin-cylinder engine behind the rear wheels but with an
increased bore and stroke providing a 697 cc engine developing 30 hp. It retained the front
and rear suspension as used on the 600 but with a larger wheelbase and track. Unlike the
Isetta and 600 that went before it, the 700 was never marketed nor thought of by the public
as a motorcycle substitute. It was, in fact, the first BMW to have a steel unit body-chassis
and was initially designed as a coupe which went into production in 1959. From this BMW
developed a two-door sedan released at the end of 1959 and early in 1961 a deluxe sedan
version came onto the market.

Only available as a four-speed manual, the 700 had drum brakes and rack and pinion
steering and was capable of 125 km/h. BMW’s interior designers gave it very thin front
seats so as to allow maximum leg room in the rear, but they were by no means
uncomfortable. The gear lever was positioned between the two front seats in a way typical
for rear-engined cars. The car was very popular and in all 23,892 coupes were produced
together with 55,707 sedans.

A longer wheelbase sedan, the 700 LS was released in 1962. Initially only the deluxe
version was available but later a more basic version joined the line-up. Also, a coupe body
style was released using the longer wheelbase but very few of these were built. This 700
LS utilised its additional length in providing for more space for rear seat passengers;
luggage space did not benefit from the increased rear overhang. The traditional BMW grille
hadn’t yet come into existence.

The BMW 700 Sport was first introduced in a coupe version; then a cabriolet was added,
built by Baur. The Sport’s main distinguishing feature was a twin-carburettor, 40 hp engine
that was then carried over to the 700 LS coupe. To improve the handling of the cars which
were promoted as true sports cars these models were fitted with a new anti-roll bar. These
small, fast cars were popular in the early Sixties, paving the way for BMW’s competition
comeback. In 1963-64 the BMW 700 Sport was known as the 700CS.