The BMW 3 Series with revised styling and enhanced levels of equipment is coming to
Australia later this year.

It will have a redesigned kidney grille and the LED headlights are slimmer, the daytime
driving lights are arranged in an inverted L shape.

Adaptive LED Headlights, fitted as standard on the BMW M340i xDrive Sedan, are
identifiable by the blue accents inside their covers. The adaptive LED headlights have
cornering lighting and non-dazzling matrix high beam as well as variable light distribution.
The rest of the BMW 3 Series range receives full LED headlights with high-beam assistant.

Modified contours and new double bars give the BMW kidney grille an even more powerful
look. Air intakes in black high-gloss positioned below the kidney grille cool the braking
system and provide a sophisticated touch.

A higher proportion of surfaces painted in the body colour and a clean-cut design lend the
rear apron of the sedan and touring are aimed at giving “an especially sophisticated
aesthetic” says BMW. Horizontal lines, slim light units and flared rear wheel arches
accentuate the width at the rear.

The exhaust system’s tailpipe finishers now measure 90 or 100 millimetres in diameter
depending on the engine variant.

The M Sport package is offered as standard on all Australian BMW 3 Series Sedan and
Touring models. It brings new design features including bolder front and rear aprons and
M light-alloy wheels in 18- or 19-inch format with mixed-size tyres.

The M Sport Package Pro is a new arrival on the options list. Available as an extension of
the M Sport package as well as for the BMW Performance models from BMW M GmbH,
this package includes extended M High-gloss Shadowline trim, M lights Shadowline and
an M Sport braking system with red callipers.

The range of 3 Series exterior colours has been expanded to include Skyscraper Grey
metallic and M Brooklyn Grey metallic as part of the M Sport package offering. BMW
Individual Frozen Pure Grey metallic and Frozen Tanzanite Blue metallic special paint
finishes have also been added to the portfolio. 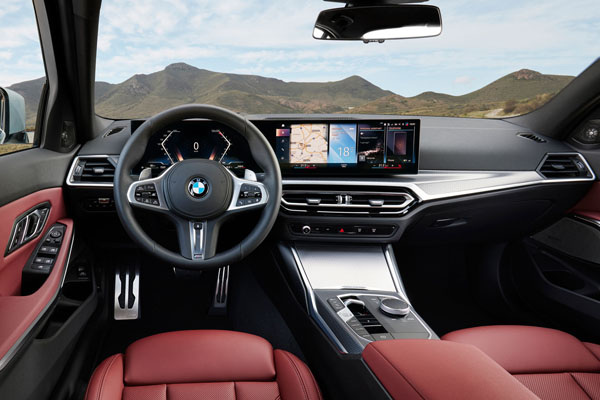 Buyers can choose from a selection of around 150 additional BMW Individual special paint
finishes.

Inside there’s a 12.3-inch information display behind the steering wheel and a control
display with a screen diagonal of 14.9 inches merge together into a single, fully digital and
high-resolution unit.

The selector lever for the eight-speed Steptronic transmission also has a new design.

BMW Australia will offer the new 3 Series Sedan in 320i, 330i, 330e plug-in hybrid and
M340i xDrive variants. The 3 Series Touring will be available solely in the 330i variant.

The My BMW App acts as an interface between the driver and vehicle and for controlling
the charging process for the high-voltage battery of the 330e plug-in hybrid model.

An additional factor in the progress made over the previous model generation is the
resource-conserving use of materials, including a high proportion of recycled materials.

Secondary raw materials account for around 50 per cent of the material used in the
aluminium castings for the BMW 3 Series. Approximately 16 per cent of all thermoplastics
are recycled.

The new BMW 3 Series Sedan and Touring line-ups will arrive in Australia in Q4 with
pricing and specification detail to be announced closer to the launch date.

We have yet to see the cars in the metal, but will comment on them when we borrow cars
to road test later this year.