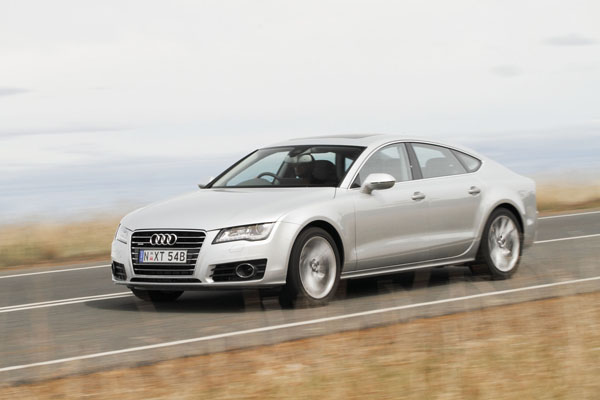 Tthe A7 Sportback in Australia in March 2011. A niche model, it’s based on the Audi A6 sedan but is a five-door hatchback with a sporty look and plenty of styling flair.

The Audi A7 Sportback has a coupe-like shape and competes with Mercedes CLS and BMW 5 Series GT. Some feel the Porsche Panamera, a distant cousin of the Audi, can also be taken into consideration.

This is purely a four-seat coupe, with the two rear units being individual seats. A smart move to our way of thinking because the rear-centre seats in other sporty cars are often pretty uncomfortable and create a squeezy feel for all three in the back when they are in use.

Getting in and out isn’t as difficult for ageing backs as in some sporty models. The big Audi handles Australian roads, even rough and ready backroads with ease, but as is often the way with cars not specifically tuned for Australia coarse-chip surfaces can noticeably increase tyre noise.

Audi has been a pioneer in the use of aluminium in its vehicles and the A7 has about 30 per cent of its components made from the lightweight material. This contributes t to lower fuel consumption and emissions, as as well as to the handling and braking.

March 2015 saw the Audi A7 getting a strong facelift to give it an even lower slung look as well as the additional of some extra brightwork. The headlights were upgraded to matrix units and provide added forward range as well as brightness. Inside is more computing power and storage space in the infotainment system.

Prices were trimmed with the introduction of the 2015 facelift as potential buyers complained that the A7 was significantly higher than those of the Audi A6 on which the A7 is based. This upset resale values of the older A7s at the time, but that has all settled down by now. 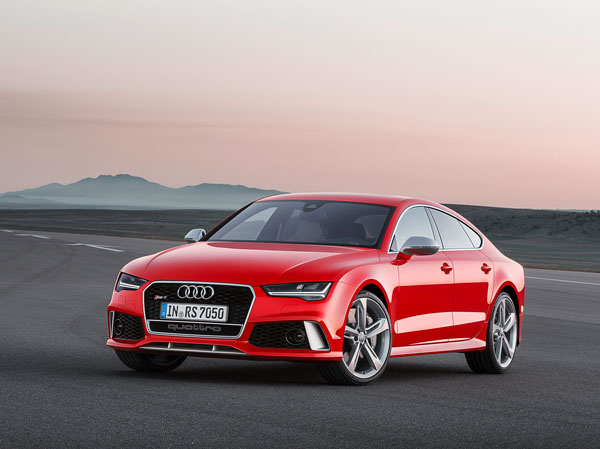 Safety items include side assist monitoring, reversing camera and a pre-safe safety system to initiate preventative measures when it senses a possible collision.

A7 Sportbacks have several engine options: a 2.8-litre naturally-aspirated V6 petrol, a 3.0-litre supercharged petrol V6 and a pair of turbo-diesels. The engine range was trimmed with the 2015 facelift, with the diesels no longer offered due to a lack of interest by Aussie buyers. It comes as no surprise that all models have automatic transmissions.

Audi is well established in Australia and sales have been increasingly substantially for quite a few years. This has resulted in more dealers being established, not only in the capital cities, but also in country cities.

Servicing and repair costs are about average for this class of vehicle, but are not outrageous. However, if you’re a social climber and stretching your budget to buy an Audi rather than a more everyday car we suggest you check on costs before over-committing yourself.

We have heard of no real problems with owners getting access to spare parts, though there are times you may have to wait for several business days for parts to be couriered to smaller dealerships.

Insurance costs, again, are about the same as those for Audi’s competitors. While it makes sense to shop around for a better deal we feel it’s unwise to chop and change insurance providers just to save a few dollars. Rather, we are aware that building a strong record with one company can be to your advantage if you have to make a claim that could be judged marginal.

Audi introduced the next generation of its A7 to Australia in October 2018. It’s improved in many areas but is still not on the used car stage so we won’t cover it here.

WHAT TO LOOK FOR
A service record from an Audi dealership is a strong selling point. It not only indicates the car is bang up to date with factory modifications. Once you have the service record on the car you buy, it’s smart to keep it up to date.

After your initial walk around the car you’re considering says it look fine, don’t even consider going further without a professional inspection, ideal by an Audi trained service person.

If the frameless windows on the Audi A7 result in wind noise during your test drive it may mean the glass, or even the door, are no longer perfectly aligned.

This is quite a bulky car so it may have suffered minor damage to the wheels, the left-front is usually the first to suffer.

Look over the paint for any signs of previous panel work, even minor parking dings. Uneven paint colours or tiny spots of paint on unpainted areas are giveaway signs. If there’s the slightest doubt the aforementioned professional should pick them up.

We have heard of infotainment screens that don’t fold down and up smoothly. Check movements several times in each direction because repairs can be expensive.

Other than that, make a complete inspection of the interior, including the luggage area for any signs of damage.

CAR BUYING TIP
Avoid a sales person who tells you there’s no need to have a pre-purchase inspection because the car is covered by warranty. Life being what it is it’s much easier to get things fixed before you buy a car than afterwards…