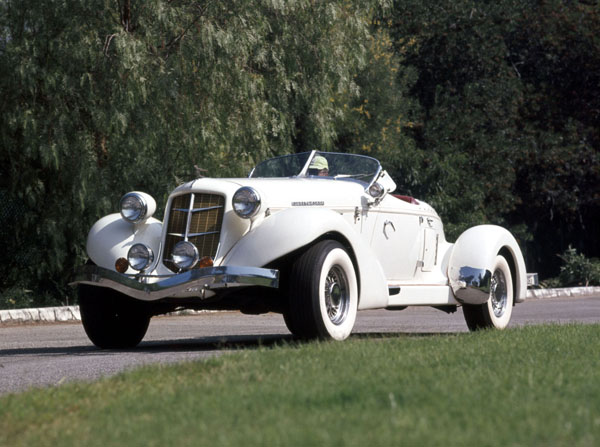 The name Errett Lobban Cord is inextricably tied up with American motoring of the 1920s and 1930s. Cord was a Californian car salesman who was also good at selling himself. The Auburn Automobile Company was struggling to survive in 1924 when they came in contact with Cord. Or maybe Cord came in contact with Auburn; nobody seems to know actually how it all came about. Auburn had established a reputation for producing cars which cost less but looked to go faster than their rivals. In some ways they were considered classics of the con man’s art, a situation which suited Cord perfectly.

Anyway Auburn were left with a stock of largely unsaleable old-fashioned cars so Cord convinced them he should run the company and immediately tarted up their stock of cars with flashy paintwork and nickel plated extras. This appealed to a section of the market that Auburn had previously ignored and soon sales were on the move. In return Cord promoted himself to company president.

Money was needed if Auburn was to remain successful so Cord resorted to the share market, selling and buying shares as the prices rose and fell and using the surplus to gain control of other automotive companies such as Duesenberg and Lycoming. It was legal activities such as those used by Cord which contributed to the Wall Street crash of 1929. After the crash car sales plunged and Auburn, like many others, was struggling.

Car manufacturers such as Cadillac had just come out with their V12-cylinder models and although sales were low they were making good money from them as they met the needs of the market. Cord wanted some of this action and instructed Lycoming to produce a cheap V12 which, to their credit, was powerful enough in a 6400cc engine to push Auburn’s old straight-eight chassis along at more than 160km/h.

Unfortunately the lower priced market this Speedster car was aimed at couldn’t see the need for a V12 in those austere days and sales continued to tumble. Cord, in trouble over share dealings, fled to England leaving others to run the company. Duesenberg stylists revamped the Speedster with the old Lycoming straight-eight in place of the V12 and supercharged the engine. Also using the Duesenberg SJ Speedster as inspiration the stylists cut off the back and substituted a boat-tail shape.

The most interesting feature of this car was the use of an epicyclic gear train between axle and crown wheel in the rear axle to give dual ratios. It gave the Auburn, with its conventional three-speed gearbox, six forward ratios and the ability to cruise at 100km/h with the engine running at just 2250rpm in almost complete mechanical silence, a feat larger car manufacturers such as General Motors, had been trying to achieve for years with much larger development budgets.