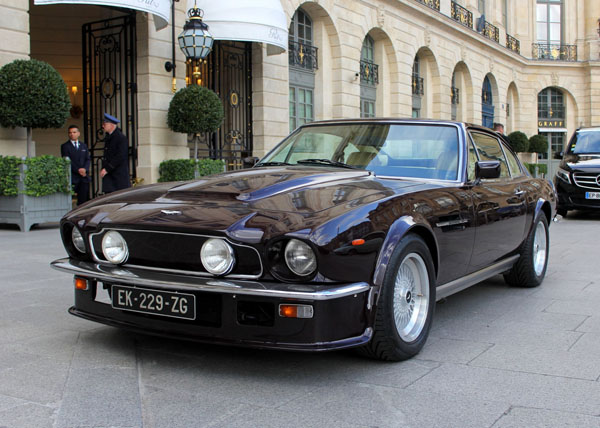 Exuding style, the 1977 Aston Martin Vantage was a beautifully finished car. Inside everything smacked of luxury. It was a big car and inside there seemed to be acres of deep, wool pile carpet all leather edged. Although promoted as a sportscar the sumptuous 2+2 leather seats and interior body trim seemed more appropriate in a limousine, as did the burr walnut door cappings and dashboard.

Under the bonnet, four cam covers and a large air intake topped an all-alloy 5.4-litre V8 four overhead cam engine capable of developing 280kW with enormous torque all across the rev range.

The whole car was beautifully handcrafted. On one of the cam covers a small brass plate carried the name of the single person at the factory who assembled that particular engine.

In spite of its size and luxury the Aston Martin Vantage was a fast car. Its top speed of 273 km/h and its acceleration from 0 to 100 km/h in just five seconds attested to this.

Its chassis, although designed in the 1960s and unashamedly built for comfort, was as good as that of any Italian exotic car. Whilst its steering was stated as being heavy in spite of power assistance it was described as being extremely accurate and informative.

Even though its ride was said to be firm to the point of being harsh and the tyres noisy it apparently stuck firmly to the road and gave the impression of being a safe car to drive. It also apparently stopped without any fuss even from a high speed in spite of its rather weighty body.

One area where its performance would not suit today’s motorists was in petrol consumption. It had a reputation for being very thirsty, but for a car weighing in at near to 5000kg that was to be expected.