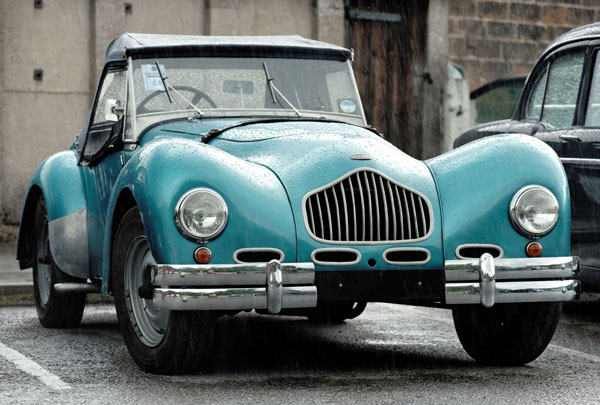 The name Allard came into the motoring history books in 1936 when Sydney Allard, a London Ford motor dealer with a penchant for motor sport, including motor racing, decided to build for himself the Allard Special.

Based on a Ford V8 chassis and with other Ford parts to provide the running gear Allard encased the whole thing in a cut down Bugatti body. He, as well as others, was obviously pleased with the results of this unusual combination because he went on to build a further 11 of these cars before the outbreak of WWII. Like the first special all were based on Ford parts with either Ford V8 or Lincoln V12 engines.

At the end of World War II Allard’s Ford dealership continued but Allard also established the Allard Motor Co and by 1946 had already announced his first models. These continued to be based on Ford engines and transmissions fitted to a special chassis which had independent suspension at the front using transverse leaf springs.

The original competition two-seater racer was known as the J1. In 1950 this was replaced by the J2, which had an aluminium body mounted on a ladder-style frame with suspension changed to independent coils at the front and a DeDion rear end.

Although a great variety of engines could be fitted the best was a 120kW Cadillac V8 which gave the car a top speed of 180km/h. Most cars sold in the UK had ex-disposal Mercury V8s with a 4.4-litre capacity and an optional OHV conversion cylinder head. Many of these were the less sporting models such as the K, P and M types which were popular sportscars but not fast enough for racing.

In the early 1950s Allards had considerable success on the race track both in Europe and North America. Allard cars appeared regularly at Le Mans and Monte Carlo achieving much success. However growth in sales and exports of cars like the Jaguar XK120 became too fierce and sales soon dwindled away.

In an attempt to increase sales Allard introduced less expensive cars using British Ford four-cylinder and six-cylinder engines but this proved to be a commercial failure. In his later years Allard spent much of his time tuning the engines of small Fords. He died in 1966.