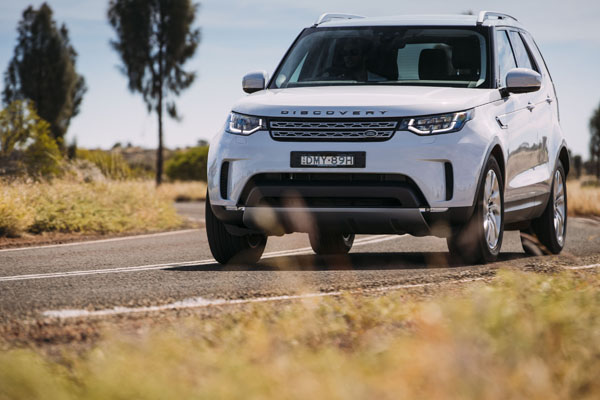 When the first Land Rover Discovery was launched in 1989 it was a cross between the tough, almost military, Defender and the upper-luxury Range Rover. Over the next 27 years and four generations it has matured into a more refined vehicle, but retained plenty of off-road capability.

Now the fifth generation Land Rover Discovery is here and we’ve just spent an interesting week running in what will be typical conditions to most owners – suburban and city running as a family station wagon. Shopping, sitting in traffic and suchlike boring stuff.

There was one exception, ‘our’ Discovery set a lap record for a luxury 4WD around the temporary racetrack a couple of days before the Gold Coast 600 Supercars race. I won’t disclose our lap time in case it turns into a competition to beat it. But our dog Bailey sitting in the navigator’s seat was pretty impressed with the handling and comfort. (Hint, the time was very long due to hopeless traffic and suspicious police people.)

Older Discoverys were heavy beasts, thankfully that problem has been solved and a reduction of 480 kg in vehicle weight achieved to the outgoing Discovery 4. The use of aluminium in 85 percent of the body is the major reason. 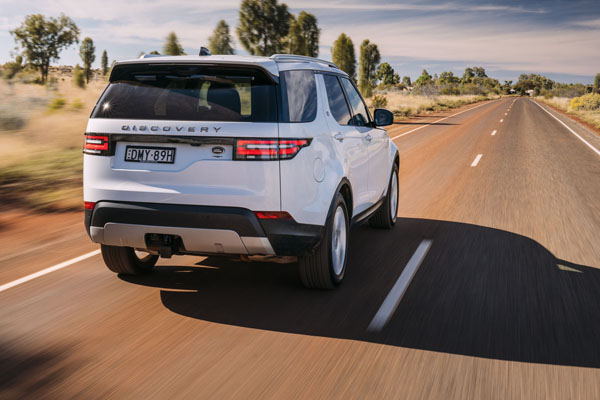 New Land Rover Discovery is sold in four levels; S, SE, HSE and HSE Luxury and with the choice of five or seven seats. Our test car was the HSE.

The rounded front is too soft for our taste and we feel it may upset Land Rover traditionalists. Then again, this market segment is becoming stylish as almost all buyers are looking for a fancy station wagon not a 4WD or SUV.

Beauty is in the eye of the beholder, so I will wait and see what people say down the track, or should that be down the suburban streets?

The interior we do like, it’s neat and straightforward in its design, and in true LR style is very usable.The high quality materials received nothing but positive comments.

Three turbo-diesel engines are offered with Discovery in Australia: two four-cylinder Ingenium units and a V6. Our Disco had a TdV6 with 190 kW and 600 Nm.

All engines sits in front an eight-speed ZF automatic transmission and in Australia are sold only with multi-mode 4WD. The 2WD option in other countries isn’t offered here.

New Discovery has the latest Jaguar Land Rover’s InControl Touch Pro infotainment system. The touchscreen is positioned high on the centre console and is easy to use through the series of menus. The clean uncluttered appearance was commented on all who rode in the Discovery with us.

Satellite navigation can share directions to a paired smartphone to help you complete your journey on foot after leaving the vehicle.

Discovery has 3G WiFi for up to eight devices and there are up to six 12-Volt sockets. S and SE models have an 8-inch touchscreen, HSE and HSE Luxury get a 10-inch screen.

The latest in crash avoidance and, if worst comes to the worst, minimisation of injuries to all occupants, is installed in these very safe Brits. All rear seats (five or seven) get IsoFix child-seat mounting points.

Getting in and out of the Land Rover Discovery isn’t as easy as in many so-called SUVs that are really only tall station wagons. Discovery is the real deal so the high(ish) seat position is necessary if you’re planing real off-road work.

Seven adults can be carried in reasonable comfort. Cramped footroom for taller second-row occupants when the front seats all the way back possibly requires compromises. The two third row seats are wide, with enough leg and headroom even for tall adults. Access into third-row seats is tricky.

With all seats in place there’s a minute 258 litres of luggage space. Lowering the third row seats increases it to 1231 litres. There’s 2406 litres with the second row seats also folded.

Hidden cubby stowage in the central console can hold four iPads or a pair of two-litre drinks bottles. A central armrest cubby large enough to house five iPads with a lid that hinges through 180 degrees to function as an armrest even when open

Discovery’s smooth, comfortable ride makes it an excellent long-distance cruiser. Something that was appreciated when we drove the new Discovery in the Northern Territory a few weeks back as part of the Aust media launch.

Around town it’s easy to drive and park despite its apparent bulk. The turning circle is nice and tight for this class and outward visibility is good.

Handling offers plenty of road grip, more than is likely to be used if you’ve got the family on board. If you’re a keen driver and mum and the kids have been left behind you will be surprised how well it holds on. However it’s still a 4WD and we suggest you choose a Jaguar sedan or sports instead of you really like to pedal hard.

Fuel consumption in our turbo-diesel was in the six to seven litre range on the motorways, climbing to a still reasonable nine to twelve litres per hundred kilometres around town.

Again we fell in love with the Land Rover Activity Key wristband. This lets you enjoy sports and active hobbies while leaving the standard key hidden in the vehicle. Holding the waterproof Activity Key up to the ‘D’ in the Discovery badge on the tailgate locks and unlocks the vehicle.

Discovery is the real deal, it’s a genuine 4WD not a toy hatchback tarted up to look like one. Other than the aforementioned over-sleek styling we would be more than happy to live with one.