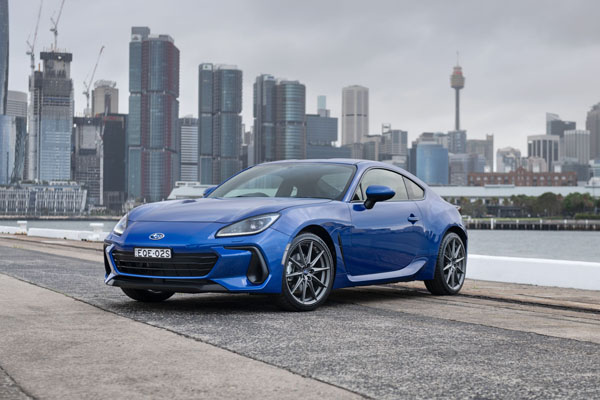 Subaru has advised us that its all-new BRZ will have more power, greater handling
precision and a stand-out design.

A powerful new 2.4-litre, naturally-aspirated Boxer engine fitted with both direct and port
fuel-injection systems brings improved performance. It has 174 kilowatts of power and 250
Newton metres of torque.

With an automatic transmission, power is up 27 kilowatts over the outgoing model and
torque by 45 Newton metres. For manual, power is increased by 22kW and torque by
38Nm.
It will have six- speed, close-ratio manual or performance-oriented six-speed automatic
with paddle shifters. There’s a Torsen limited-slip differential.

Active Sound Control will enhance engine sound inside the cabin for a more engaging
driving experience.

A new 7-inch, customisable digital instrument cluster puts the tachometer at its centre and
features a digital speedometer readout.

The cabin is finished in sporty black upholstery and a leather-wrapped steering wheel and
gearshift.

BRZ Coupe’s sports seats are cloth-trimmed while Coupe S seats are finished in a
combination of Ultrasuede and leather-accented trim. Driver and front passenger seats are
heated in the Coupe S.

Aluminium has been used for the bonnet, front guards and roof skin, helping to keep the
car’s weight low.

Braking is by large, ventilated front and rear disc brakes.

Commenting on the 2022 BRZ, Subaru Australia Managing Director Blair Read said, “the
compact sports coupe has generated an impressive amount of pre-launch interest, with
the first allocation of 500 vehicles already exhausted. We look forward to sharing more
information about pre-order for the next allocation of the popular Subaru BRZ in due
course.”