Mitsubishi has been a major player in the SUV and 4WD segments, selling the Eclipse Cross, Outlander, Pajero Sport and Pajero.

The baby of the bunch is the ASX. It’s not really an SUV and only has 2WD (the front wheels) but is hardly alone in this.

Mitsubishi ASX is a small SUV that’s been on sale in Australia since 2010. It frequently sits in top spot in sales for its class. A major reason for its success is the low prices achieved because its capital costs have been paid off. But there’s more to it than that –
it’s stylish, easy to drive and appeals to families with preteen children.

STYLING
This upgraded for 2020 Mitsubishi ASX has the “Mitsubishi Dynamic Shield” front end. In the ASX black and chrome finishes have been added to the new-shape front bumper and grille. The semi-sporty GSR model has a rear spoiler.

INTERIOR
Inside are black cloth headlining, microsuede and leather-look seats with red stitching. The Exceed has leather seats.

INFOTAINMENT
The 2020 model has an eight-inch display system, a nice move up from the previous seven-inch unit. The screen is clear and only requires a quick glance, which is a handy safety feature for the driver.

ENGINES / TRANSMISSIONS
The biggest change is that the ASX Exceed and the new GSR model have a 2.4-litre engine with power of 123 kW and torque at 222 Nm. The others retain the existing 2.0-litre powerplant (110 kW / 197 Nm). 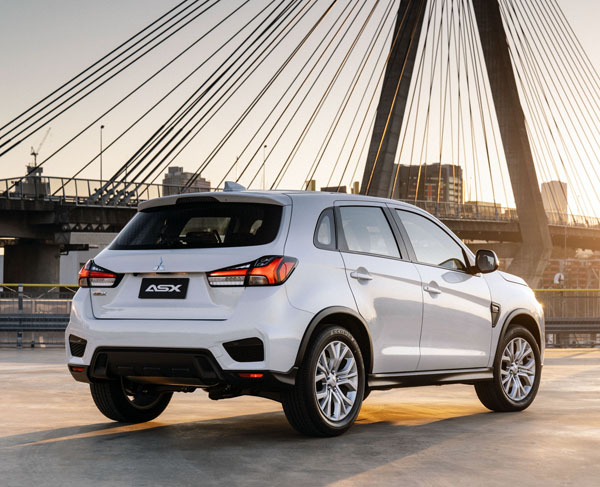 Electrochromatic rear view mirror and Forward Collision Mitigation (FCM), previously part of the ASX with ADAS package, are now standard across the range. This system detects obstructions ahead and issues a visual and audible alert when there is a danger of a collision, automatically applying the brakes to either avoid a collision or reduce the impact.

Mitsubishi’s Emergency Stop Signal System automatically flashes the hazard lights to warn the driver behind when sudden braking is detected at a speed above 55km/h.

DRIVING
The 2.4-litre engine has plenty of grunt and will even give a short period of torque steer if you flatten the accelerator off the line. It’s nicely responsive, which we like as it’s more pleasant to pilot than the small displacement turbo-petrol engines.

The front seats are quite well shaped and provide a comfortable ride. The rear seats will probably require an adult sitting behind the driver to ask for a bit more legroom, footroom is fine. Five can be carried but it’s better if the three in the back are kids.

Improvements to the Mitsubishi ASX in its latest incarnation makes it reasonably smooth and comfortable. 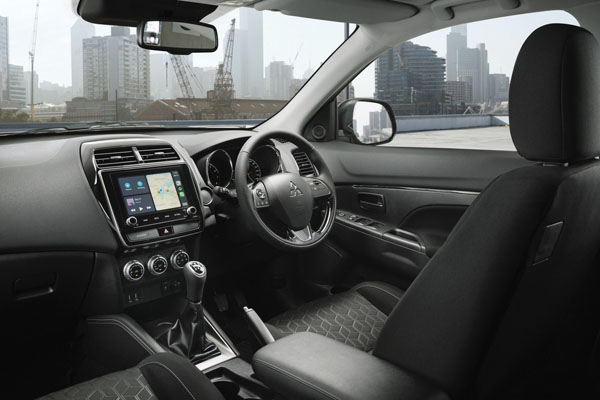 Steering has a nice feel and gives the driver a good feel of what’s going on. It’s no sports SUV, though the engine almost puts it into that category at times. Cornering is simple and the ASX generally follows the chosen line without you having to correct it midway through.

Road noise is generally well damped, but some stretches of Australia’s notorious coarse-chip surfaces set up a huge racket in the cabin.

Fuel consumption during our test around town was in the nine to eleven litres per hundred kilometres range, on the gentle sections of our road test route and motorways it could slip below six litres per hundred.

SUMMING UP
Mitsubishi ASX has almost reached double digits in its age, but continues to feel as though it’s only about three to four years old. A new one is rumoured to, finally, be in the design stages.