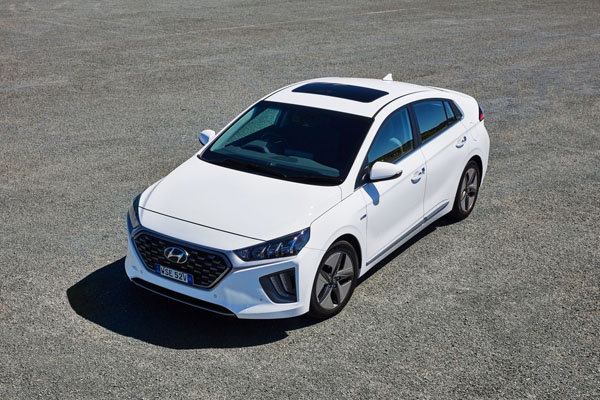 Hyundai is very serious about the transition to electric vehicles and the Ioniq is the Korean marque’s first dedicated eco vehicle. There is no petrol-only variant – it’s sold with a choice of three electrified powertrains – Pure Electric, Hybrid and Plug-in Hybrid

Though it was introduced less than a year ago the Ioniq recently received a major update. The most important change is that it benefits from a refreshed Australian chassis tune. More about this in the Driving section of this review.

STYLING
Thankfully the Koreans have chosen not to go for way-out shapes for its electric models. This is a long, sleek five-door hatch that’s mainstream in its shape. It has an impressively low Cd number of 0.28.

Styling changes for 2020 include redesigned front and rear lights, with the rears now extending across the full width. There are reshaped front grilles and new-design alloy wheels.

INTERIOR
Inside the 2020 Ioniq there’s a revised dashboard intended to give it a more upmarket look and feel. It has premium soft-touch finishes, as well as ambient lighting in the Premium and Electric versions.

INFOTAINMENT
A new, tablet-style multimedia unit displays on a 10.25-inch screen. It gives access to satellite navigation and multimedia. It has Apple CarPlay and Android Auto smartphone connectivity.

ENGINES / TRANSMISSIONS
Ioniq Hybrid is driven mainly by a 77kW/147Nm petrol engine. This works in conjunction with a 32kW/170Nm electric motor. 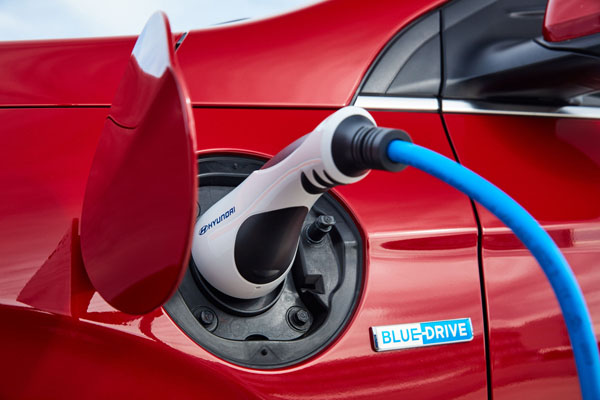 SAFETY
Hyundai’s extensive SmartSense safety suite has been expanded and now has High Beam Assist with the Driver Attention Warning system being upgraded. There are seven airbags and IsoFix child seat mounting points on the rear two seats.

DRIVING
Who you hit the accelerator the car reacts instantly as the electric motor is at full strength immediately. The seamless torque of an electric motor, the near-silence of its powertrain is lovely to sit behind.

The petrol engine is very quiet and smooth. The two powerplants work well with one another by courtesy of the computer.

When you dial up the regenerative braking to full strength, the bulk of the driving can be done by simply modulating the accelerator pedal – you only ever need to prod the brakes when coming to a complete halt.

Just about everyone we have spoken to who have driven an electric or hybrid say they enjoy this feeling of having what is almost a “one-pedal” car. This not only adds to their concentration – which additionally improves their safety.

The Hybrid offers electric-only trips of up to 63 kilometres. We managed in the low to mid 50s a couple of times so the 63km isn’t far from the maker’s claim.

But, enough of the clever electric components, it’s time to move onto the Ioniq purely as a car.

It has a prestige feel that is as good as conventional prestige European cars. The interior is spacious with good legroom in all seats. As you would expect the centre rear is on the squeezy side when three are being carried. Again, this is pretty much the norm in this class.

Handling is very good with a nice feeling through the steering and good response at all times. The virtually instant response of the powertrain gives you that added feel of being completely in control at all times that we really appreciate.

Road noise is generally well subdued though, as usual, the concrete surface of the M1 in our home region on the Gold Coast do increase sound levels. We’ve heard a lot worse, though.

Coarse chip country roads are handled without too much fuss, probably a result of the local tuning Downunder by Australian and Korean engineers.

SUMMING UP
Though it’s relatively expensive for this class due to its complex drivetrain the Hyundai Ioniq plug-in Premium is a solid indication of the near term future of motoring. Early adopters are likely to fall in love with it.