It is no secret that dual-cab utes have quickly become an Australian favourite, their capability and practicality a real drawcard for drivers looking for a vehicle suitable for both work and play. The Volkswagen Amarok has been one of the players since its arrival on these shores in 2011, offering almost car-like comfort seldom seen in a rugged utility.

STYLING
You want a pickup that looks like a pickup, one who’s chiselled chunky features hints at serious capability. The Amarok is one of those, an updated grille and front fascia and wide slightly aggressive stance also doing their bit to paint a pleasing picture.

INTERIOR
The supportive, Napa leather seats are the first thing you notice in the revised interior of the revamped Amarok. With two-stage heating and 12-point power adjustment, they are a rarity in a vehicle of this ilk, but all the more welcome.

As with its predecessor, the cabin has a good finish, superior materials and thought given to how it all comes together. Of course, there are the requisite hard plastics for durability but even they seem to fit in seamlessly with the grand plan.

This feels like a comfortable space in which to be, with the controls you need at your fingertips and most of those features that make both long and short trips a breeze.

A 6.3-inch integrated colour touchscreen seems a bit small given the Amarok’s bulk but supports AppleCarplay and Android and Auto applications, Bluetooth connectivity and Digital Radio for those who can access it.

Storage is adequate, not generous, with deep door bins and dash top tray unable to detract from a small centre console and a flip-out double cup holder on the floor of the rear compartment which is begging to be kicked. 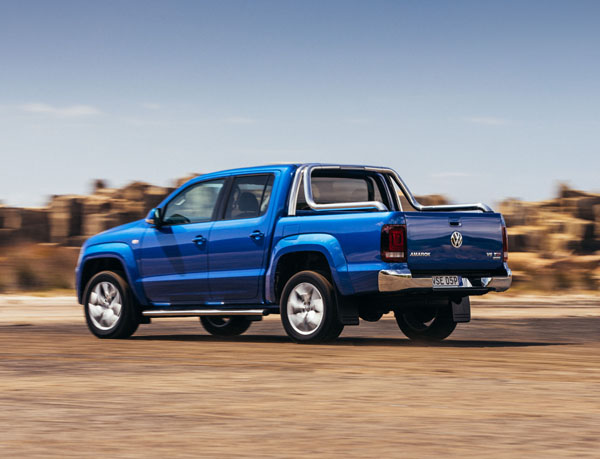 Talking of the rear compartment, the lodgings back there don’t seem to match those in the front for luxury. While headroom and shoulder room are okay, there is less room for the legs, especially for taller passengers. No air vents or centre armrests back there, and disturbingly, no airbags either.

The Amarok is still the only ute in this class with a tub capable of fitting a pallet between the wheel arches. For real-world practical options, because let’s face it how often do you haul a pallet, this means that it is easier to carry the surfboards, camping gear or wide or oddly shaped cargo when you need to.

ENGINES / TRANSMISSIONS
A lusty 3.0-litre V6 turbocharged diesel is the showstopper unit for the new Amarok, producing 165 kW of power and 550 Nm of torque, the latter available from just 1500rpm. An automatic overboost function at throttle applications of 70 per cent or more kicks those figures to 180 kW and 580 Nm for up to ten seconds to give you that easy oomph when you need to overtake quickly.

An efficient eight-speed automatic transmission completes the combination, shifting smoothly up and down the ratios for optimum driving performance. 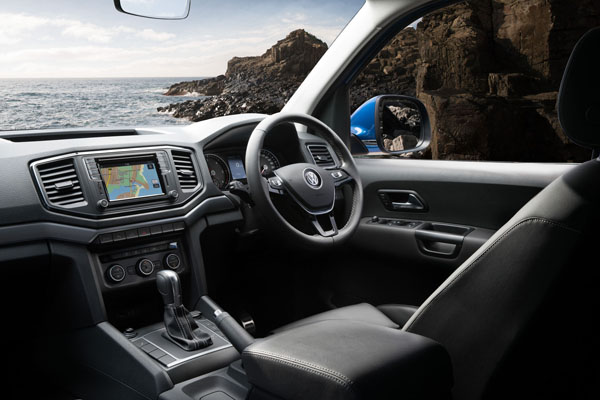 DRIVING
So you want the versatility of a dual-cab but want it to drive like a car rather than a truck?

The ride is as comfortable and compliant as it has always been but the extra power means it is smoother on take-off too and of course much more capable when you need it to be.

It breezes along without effort making quick work of inclines, barely notices irregularities on the road and thanks to the four large disc brakes, stops quickly too.

The steering feels a little light especially through roundabouts or tight city corners but it’s easy enough to adjust. It is quiet in the cabin too, given it is a diesel, although a few growly engine notes wouldn’t go amiss when you are pushing it to pick up pace.

Like most utes, the Amarok feels better balanced under load but unlike many of its competitors it doesn’t juggle around as much when empty.

Off the bitumen, the Amarok is self-assured and comfortable thanks much in part to the 4Motion AWD system which works on a 40:60 rear wheel bias on high traction surfaces but can be varied according to need.

Without a dual-range transfer case off-road adventures may be confined to the road partly travelled rather than one you have to make for yourself. There is a standard differential lock should things get hairy.

The departure angle is 24 degrees, wading depth 500 mm and according to Volkswagen, the Amarok can climb a 45-degree slope, not that most buyers will ever come close to testing those claims especially on the 19-inch road tyres it wears.

The AWD does add confidence when towing though and although the braked capacity remains at 3000 kg, a higher gross combination mass means the Amarok can tow closer to maximum with a sizeable payload than most of its rivals.

Volkswagen claims average combined fuel use of 7.8L/100km. Our week saw figures closer to 10L/100km with a fair bit of highway driving thrown into that mix.

VERDICT
This Amarok TDV6 has the grunt, style and capability to appeal to buyers who are looking for a lifestyle ute rather than a working truck. Not that the Amarok is adverse to hard work, mind you, but given its price this Ultimate iteration is probably more about a slight glisten than heavy sweat.

Despite its many great features the Amarok does fall short on the safety equipment. The lack of curtain airbags in the rear, and driving aids including automatic emergency braking and blind spot warning that less expensive competitors list as standard is an interesting omission in dual cab ute also looking to pique the interest of families.